The agreements, signed during the President's visit to Laos, cover various fields ranging from politics, economics, and culture.

Vietnam and Laos signed 14 agreements spanning a wide range of cooperation during the two-day visit to the neighboring country paid by Vietnamese President Nguyen Xuan Phuc on August 9-10.

The agreements include one on cooperation between the two president’s offices for 2021-2025; cooperation in  justice for 2022; supplementing previous cooperation agreement in public security; MoU on drug trafficking prevention and control; MoU on building a national cultural military school in Laos; Letter of intent in joint search and rescue between two ministries of national defense; cooperation between Vietnam’s Bac Giang Province and Lao Xaysomboun Province.

On August 10, Vietnam officially handed over the Lao National Assembly House, which is funded and built by the Vietnamese Government.

The US$112-million five-story neoclassical edifice, which is “a gift of the Vietnamese Party, State, and people”, features architecture imbued with Lao cultural traits, according to Saysomphone Phomvihane, president of the National Assembly.

During the visit, Vietnam has handed over a vocational school worth US$5 million in Khammouan Province.

In talks between Vietnamese President Nguyen Xuan Phuc and General Secretary of the Lao People’s Revolutionary Party and President of Laos Thongloun Sisoulith on August 9, the two sides stressed the need to strengthen political links by having more visit exchange.

They agreed to promote the training of Lao senior officials, to carry out the bilateral education cooperation in 2021-2030, to insert the Vietnam-Lao History in the teaching curricula of both countries; and to disseminate the long-lasting friendship among the two peoples.

The two countries reaffirmed the will to enhance cooperation in international agendas, including in the water resource management of the Mekong River, the ASEAN Centrality, the ASEAN-led mechanisms, the peace, security, and free navigation in the South China Sea as well as the rules-based approach in solving international disputes.

Vietnam has poured US5.16 billion in 209 projects across Laos, ranking third among investors in the neighboring country.

In the working session with Lao Prime Minister Phankham Viphavanh on the same day, the two leaders talked about measures to promote trade and investment, and the acceleration of some projects including Vung Ang No.1, 2, 3 port projects, the Hanoi-Vientiane Expressway, Vientiane-Vung Ang Railway, Lao-Vietnam Friendship Park in Vientiane, Nongkhang Airport and hospitals in Lao Houaphan and Xiangkhouang Provinces.

They discussed ways to make full use of the trade pacts that the two are signatories of.

They exchanged views on the cooperation in the Mekong sub-region and with Cambodia to accelerate the development of the Cambodia-Lao-Vietnam triangle by 2030.

A number of bilateral meetings have been held in addition to the talks between the top leaders during the two-day visit.

Other meetings are the one by the head of the Party Central Committee's Commission for External Relations and Lao counterpart Thoongsavanh Phomvihane; one by ministers of foreign affairs Bui Thanh Son and Saleumxay Kommasith; by Vietnamese Minister of Industry and Trade Nguyen Hong Dien and his Lao counterpart Khampheng Xaysompheng and Minister of Energy and Mines Daovong Phonekeo; by Minister of Justice Le Thanh Long and his Lao counterpart Phayvy Xibualypha; and by Chairman of Vietnam’s northern province of Bac Giang and Lao Xaysomboun governor Khamlieng Outthakaison. 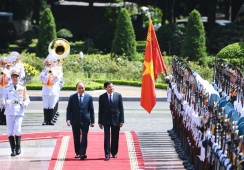 Vietnam-Laos to boost cooperation on trade, industry and energy