Long Thanh International Airport would undergo a testing period in the second quarter of 2025.

Contractors are tasked with completing the construction process for Long Thanh International Airport in the southern province of Dong Nai, the largest of its kind in Vietnam, before March 31, 2025, before being put into operation in the fourth quarter.

Minister of Transport Nguyen Van The gave the conclusion following a recent meeting to review the progress of the Long Thanh airport Phase 1, including a runway, passenger, and cargo terminals.

The requested the Civil Aviation of Vietnam (CAAV) to work with units under the Ministry of Transport (MoT) in finalizing construction and site clearance plans for four sub-component projects of the airport before July 8, 2021, at the latest.

“Contractors and related units are expected to closely cooperate with Dong Nai’s authorities to complete the site clearance process in 2021 as instructed by the government and National Assembly,” The said.

For the second component that includes facilities for air navigation management with an investment capital of VND3.43 trillion (US$149 million), the Vietnam Air Traffic Management Corporation (VATM) expected the work to start in June 2023 and operate around July-December, 2025.

The construction of the third project component, carried out by the Airports Corporation of Vietnam (ACV), has started this January with the removal of landmines and unexploded ordnance and is scheduled for completion in December 2025.

Meanwhile, the CAA is in the process of selecting a contractor for the fourth phase of the project, consisting of the remaining works of the airport.

Total investment capital for Long Thanh International Airport is estimated at VND336.6 trillion (US$14.6 billion). Once completed, the project would have a capacity of serving 100 million passengers and handing five million tons of goods a year.

During the first phase with an investment capital of US$4.77 billion, the project is set to build a runaway, taxiways, a passenger terminal with a capacity of 25 million passengers, and a cargo terminal of 1.2 million tons of goods in a year, along with other supporting facilities.

Under Vietnam’s socio-economic development plan in the 2021 – 2025 period, the country would need around US$150 – 200 billion to finance infrastructure development projects, including airports, seaports, railways, and expressways, among others. 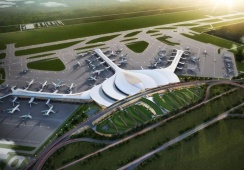