The platform would not only help strengthen the linkage between producers and customers amid current restriction measures but also serve as the foundation for farmers to embark on digital transformation.

The Ministry of Agricultural and Rural Development (MARD) today [August 31] launched a platform to help strengthen the linkage between farmers and distributors.

The event drew the participation of 63 provinces/cities, 200 enterprises, business associations, and cooperatives, with the goal of forming value chains from production, processing, to harvesting and distribution.

“The market, not producers, would be the decisive factor,” said Minister of Agricultural and Rural Development Le Minh Hoan, expecting farmers and cooperatives via this platform would better understand market behavior.

“In this regard, the MARD and local authorities are set to play the role of connecting the supply-demand to ensure greater efficiency in agricultural production,” Hoan continued.

Hoan also shared his optimism that from a strong foothold of the domestic market, local producers could take further steps to penetrate markets abroad.

“Information collected from distribution channels and the market is essential for the authorities and farm producers to adjust their operation in production and trade promotion activities,” he added.

The platform would organize trading for each type of agricultural product depending on harvesting season and characteristics in each locality, including supply-demand connecting sessions in Hanoi, Ho Chi Minh City, northern provinces, Mekong Delta region, Central Highlands, and the South.

During these sessions, policymakers and experts would provide suggestions on production methods in association with market penetration.

Another key aspect of the platform is a database on the information of agricultural products in each locality, harvesting season, quality, and quantity of key farm produce that Thach said would be the basis for digitalization in the agricultural sector in the coming time.

Sharing Thach’s view, Deputy Minister of Agricultural and Rural Development Phung Duc Tien noted the introduction of the platform comes at a difficult period when the pandemic is disrupting the movements of agricultural products.

“While the platform would help strengthen the linkage between farm producers and customers amid current restriction measures, it is the foundation for farmers to embark on digital transformation,” Tien said while saying higher product quality would bring more added value and is the stepping stone for Vietnam’s farm produce to take on international markets.

Deputy Minister of Agricultural and Rural Development Phung Duc Tien revealed that the platform for farm produce was based on the activities of the MARD’s Southern Taskforce in helping to connect and distribute agricultural products in southern provinces/cities under stay-at-home order.

The Southern Taskforce helped locals to set up websites, and advertise agricultural products on social networks or hotlines, with 1,300 coordinators and 58 warehouses being launched so far, capable of distributing up to 1,000 tons of farm produce per day in Ho Chi Minh City during the lockdown. 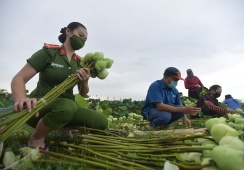