Twenty-seven out of 63 provinces/cities have fully disclosed information on their respective budgets this year, scoring 75 points and over, while in 2017, none was able to do so.

Vietnam provinces and cities have made steady efforts in improving budget transparency, reflected by an average score of 69.09 out of 100 in the 2020 Provincial Open Budget Index (POBI), 3.54 points higher than the previous year’s edition.

“A government with high level of transparency and active public participation in budget oversight would boost accountability for greater efficiency and fairness in budget management,” she noted.

“This is particularly important for Vietnam’s target of achieving global standards on transparency for further integration in global economy, especially in international financial market,” Huong stressed.

The 2020 POBI report was jointly launched by two members of the Budget Transparency, Accountability and Participation (BTAP) Alliance, the Vietnam Institute for Economic and Policy Research (VEPR) and the Center for Development and Integration (CDI). It was first made public in 2017 to assess the transparency level in the management of provincial budget nationwide and their compliance with transparency requirements stipulated by the Law on State Budget.

“With 27 out of 63 provinces/cities have fully disclosed information on their respective budgets, the result marked a great stride from four years ago when none was capable of doing so,” noted economist Vu Sy Cuong, member of POBI research team.

Cuong also point out the fact that from 25 provinces deemed to have insufficiently disclosed their budget information in 2017, the figure has been dropped to just two.

Despite the positive results, Cuong suggested there remains room for improvements, especially in encouraging the public to participate in budget management process.

“POBI 2020 shows the majority of provinces/cities have not disclosed the draft budget estimate  publicly,” Cuong said, adding this document is useful in seeking opinions from experts and citizens to setup the yearly budget estimate of each locality.

According to Cuong, only 25 out of 63 provinces have announced the procedures to provide state budget information to the people, and only 16 are using social networks such as Facebook or Zalo, to interact with the people on issues related to state budget.

Hanoi continued to show improvements in budget transparency with score of 83.78 against 79.59 of the previous year, while Ho Chi Minh City also improved its score to 68.67, but remained in the category of moderate disclosure. 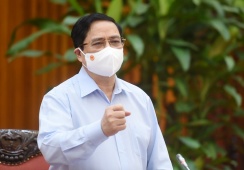 Vietnam sets up for budget transparency