The Hanoitimes - While purchasing activity and employment were scaled back, business sentiment improved to a 16-month high.

The Vietnam Manufacturing Purchasing Managers' Index (PMI) dipped fractionally below the 50.0 no-change mark to 49.9 in November, signaling broadly unchanged business conditions during the month, according to Nikkei and IHS Markit.

This followed a reading of 51.8 in October and was the first sub-50 figure in three months. A reading below the 50 neutral mark indicates no change from the previous month, while a reading below 50 indicates contractions and above 50 points to an expansion.

Output decreased slightly in November, thereby ending a two-month sequence of growth. That said, anecdotal evidence suggested that the reduction could be temporary as a number of firms indicated that recent stormy weather and subsequent flooding had disrupted their production during the month.

The Covid-19 pandemic was also a factor weighing on output. New orders continued to rise, but only fractionally as business was impacted by the stormy weather conditions and flooding, as well as the pandemic. The latter had a particularly negative effect on new export orders, which decreased solidly.

On the other hand, a number of respondents indicated that new orders had increased amid improving underlying demand. With new order growth slowing, firms worked through outstanding business, leading to a tenth successive reduction in backlogs of work. The latest fall was solid, but softer than in October.

Falling workloads led firms to scale back their employment and purchasing activity during November. The modest reduction in staffing levels followed a slight rise in the previous month. Purchasing activity decreased for the first time in three months.

The fall in input buying fed through to a reduction in stocks of purchases. In both cases, however, consumer goods producers bucked the wider trend by posting expansions.

Meanwhile, a reduction in output during the month resulted in a decrease in stocks of finished goods.

As well as hampering production, the stormy weather and Covid-19 pandemic combined to disrupt the delivery of purchased items to manufacturers. Suppliers' lead times lengthened for the twelfth successive month and to the greatest extent since August. Raw material shortages were also a factor behind delivery delays.

Shortages of raw materials contributed to rises in input costs during November, with difficulties in importing items and higher prices in international markets also cited. Input prices increased sharply, and at the fastest pace since August 2018. The rate of output price inflation also quickened, but remained modest. The rise in charges was the greatest for two years.

Blip on road to recovery

Despite the setback in November, firms expect production to expand over the coming year. Confidence was centered on expectations that the Covid-19 pandemic would remain under control in Vietnam and cause less disruption globally.

“Although at first glance the latest Vietnam Manufacturing PMI figures are a little disappointing, there is reason to believe the setback in November was just a blip on the road to recovery,” said Andrew Harker, associate director at IHS Markit, which compiles the survey.

“A number of panelists signaled that a succession of storms that have hit Vietnam in recent weeks, and associated flooding, hindered production, new orders and the receipt of deliveries during the month,” he noted.

"We could therefore still be on track for a positive end to the year. In fact, business confidence improved to the highest since July 2019 on expectations that the Covid-19 pandemic will prove less disruptive in 2021. IHS Markit forecasts GDP in Vietnam to rise 6.1% next year." 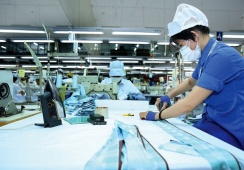 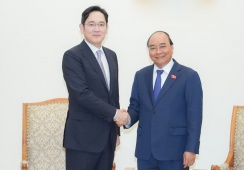