The Hanoitimes - In addition to the ratification of new laws, Vietnam’s participation in high-standard FTAs ensures the country’s status among attractive investment destinations, Prime Minister Nguyen Xuan Phuc has said.

Mr. Phuc made the suggestion in a meeting on September 7 with 15 Japanese firms that are eligible to receive subsidies from its government to expand business and investment activities in Vietnam.

Vietnam is committed to creating utmost conditions and improving its business environment so that all 15 enterprises would have successes in doing businesses in the country, said Mr. Phuc.

In addition to the ratification of a number of new laws, including the Investment Law, Law on Enterprises, PPP Law, Vietnam’s participation in high-standard free trade agreements (FTAs), including the Comprehensive and Progressive Agreement for Trans – Pacific Partnership (CPTPP) and the EU – Vietnam Free Trade Agreement (EVFTA) aims to ensure the country would remain an attractive investment destination, Mr. Phuc added.

This also comes in a context that Vietnam has a population of nearly 100 million with growing incomes and is a part of a dynamic ASEAN that is home to 650 million people.

Mr. Phuc noted the Vietnamese government has established a task force specialized in drawing FDI while instructing the reopening of some commercial flights to countries with high level of safety, including Japan.

According to Mr. Phuc, Vietnam is in high demand of investment capital for development, for which the country welcomes Japanese firms expanding investment in infrastructure, energy, manufacturing, hi-tech farming, innovative startups, financial services, among others, as well as being strategic partners for the privatization of local state-owned enterprises.

Japanese Ambassador to Vietnam Yamada Takio said Vietnam is reaping benefits from the diversification of global supply chains, referring to a survey conducted by the Japan External Trade Organization (JETRO) showing that many Japanese companies are planning to move their production facilities to Vietnam.

Mr. Takio expected the two countries to soon resume flights while Vietnam should accelerate the disbursement progress of public investment funds and improve its credit outlook.

The Japanese ambassador said the Tokyo government has earmarked around US$2.3 billion in the fiscal year 2020 supplementary budget to create a subsidy program to encourage local companies to diversify their supply chains. In the first round of selection, 30 enterprises were qualified for the subsidy, of which 15 presented today have chosen Vietnam.

In the coming time, the Japanese government would carry out the second and third rounds, Mr. Takio informed.

At the meeting, a representative of the Japan Chamber of Commerce and Industry (JCCI) recommended more incentives policies for the fields of manufacturing and energy infrastructure under the PPP mechanism, or to allow Japanese firms to invest in Vietnam’s SOEs.

JCCI expected preferential treatment for a whole production chain, instead of a single company, which would encourage large scale investment from Japanese firms using modern technologies. 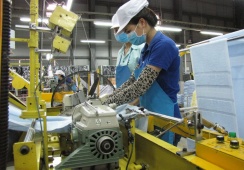 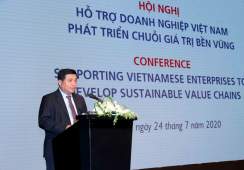 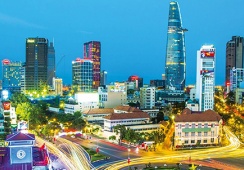