The Hanoitimes - The agreement would protect lawful rights of the business communities in Vietnam and the US, promoting greater trade relations.

Prime Minister Nguyen Xuan Phuc has signed a resolution approving the Customs Mutual Assistance Agreement (CMAA) between Vietnam and the US which aims to further strengthen bilateral cooperation on security and the facilitation of lawful trade.

CMAAs are bilateral agreements between countries that are enforced by their respective customs administrations. They provide the legal framework for the exchange of information and evidence to assist countries in the enforcement of customs laws, including duty evasion, trafficking, proliferation, money laundering and terrorism-related activities. CMAAs also serve as foundational documents for subsequent information sharing arrangements.

At the ceremony, Mai said the agreement would help customs authorities in the two countries timely identify trade fraud activities, which is a significant issue amid growing trade relations between the two countries.

Meanwhile, the establishment of communication channel under the agreement is instrumental in the fight against trade frauds and illegal transshipment, preventing losses to state revenue and ensuring fair and safe business environments, Mai added. 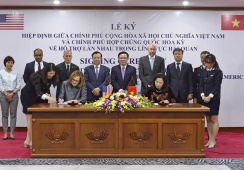