The Hanoitimes - Vietnam customs have identified a list of foreign goods forging Vietnamese origin that contributed to a surge in exports to the US, including bicycles, solar batteries, seafood, and wooden products.

Efforts from local customs authorities have timely addressed cases of foreign companies abusing preferential treatments from free trade agreements (FTAs) between Vietnam and its partners, particularly the US, for illegal transshipment, according to the General Department of Vietnam Customs (GDVC).

Specifically, Vietnam customs have identified many foreign goods forging Vietnamese origin that contributed to a surge in exports to the US, including bicycles, solar batteries, seafood, wooden products, among others, said a GDVC representative at a press conference on combating trade fraud on July 6.

So far, the customs have investigated 76 cases, including 24 regarding origin fraud, resulting in the seizure of 3,590 bicycles, over 4,000 bicycle components, 12,000 parts of kitchen cupboard and VND33 billion (US$1.42 million) in administrative fines.

During the process of economic integration, Vietnam has signed multiple trade agreements, including the US – Vietnam Bilateral Trade Agreement and the EU – Vietnam Free Trade Agreement, in turn creating huge competitive advantages for Vietnam.

This, however, also puts pressure on state agencies in not only ensuring a favorable environment for foreign direct investment (FDI) attraction, but also in preventing growing cases of abusing Vietnam’s open policies for exporting purposes.

To step up the fight against trade fraud, Vietnamese government agencies are actively carrying out their tasks in a inter-disciplinary effort approved by Prime Minister Nguyen Xuan Phuc in July 2019 to tighten measures against circumventing trade remedies and origin fraud.

According to the GDVC, drastic measures from the authorities have raised awareness among the business community in law compliance, many have committed to investing in machinery and equipment to meet the required localization rate in production.

In April, PM Phuc signed a resolution approving the Customs Mutual Assistance Agreement (CMAA) between Vietnam and the US which aims to further strengthen bilateral cooperation on security and the facilitation of lawful trade.

The agreement is expected to protect lawful rights of the business communities in Vietnam and the US, promoting greater trade relations. 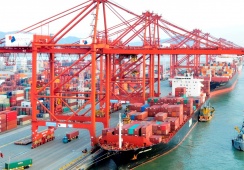