Further fiscal and monetary policy interventions may be needed to support recovery of private demand, asserted the World Bank.

The rapid suppression of the new Covid-19 outbreak in late January 2021 in the northern province of Hai Duong, the epicenter, has helped maintain Vietnam’s positive outlook for economic recovery in 2021 with an estimated GDP growth of 6.5%.

However, “special attention should be paid to how the Covid-19 vaccinations will be rolled out domestically and globally as they will impact the pace of Vietnam’s economic growth,” stated the World Bank (WB) in a note, adding further fiscal and monetary policy interventions may be needed to support recovery of private demand.

The Ministry of Finance’s proposal for a second round of tax and land rental fees payment deferrals is being discussed by the government. The total size of the package was estimated at VND115 trillion (US$ 5 billion). If approved and implemented well, it is expected to help businesses and households maintain their economic activities, particularly in tourism, which remains depressed, stated the WB.

Despite the new Covid-19 outbreak, retail sales in February grew by 0.3% month-on-month and by 8.3% year-on-year due to higher consumption demand associated with the Tet holidays.

“While lower than pre-Covid-19 performance, this growth suggests that the government’s targeted response to the outbreak mitigated the spillover of the negative impacts of anti-Covid stringency measures on economic activities to provinces outside the epicenter,” noted the WB.

While textiles and apparel, footwear and phones contributed to lower exports, computers, electronics and optical products, machinery, metal and metal products, and furniture maintained robust growth. Foreign-owned exporters, who dominate high-technology product manufacturing, appeared to be more dynamic as their exports dropped by only 1.0% (year-on-year), compared to a 15.1%-fall in exports of domestic firms.

In January 2021, imports of phones, computers, electronics and their parts, and machinery accounted for half of total imports from China and grew by over 75% year-on-year. This reflects both Vietnam’s heavy reliance on imported inputs in manufacturing and the continuation of trade diversification due to trade tensions between US and China, which have yet to be resolved.

After a sub-par performance in January 2021, the country attracted US$3.4 billion of FDI in February, which was 70.4% higher than in the previous month, and tripled the value of FDI observed in February 2020.

The recent increase in FDI amid the Covid-19 pandemic was primarily driven by higher greenfield investments (265.7% year-on-year) and expansion (273% year-on-year). Major projects included the O Mon II thermal power plant worth US$1.31 billion in Can Tho, and an OLED panel module plant worth US$750 million in Hai Phong.

The Consumer Price Index (CPI) grew by 1.3% (month-on-month) and 0.7% (year-on-year) in February. This acceleration in prices increase followed months of deceleration. It reflects the one-time adjustment in electricity tariffs (up by 10%) and stronger consumer demand, particularly for food products during the Tet holidays. Food prices were 0.3% higher than in the previous month, and 1.2% higher than in February of 2020.

Credit growth remained at 12.0% (year-on-year) during February 2021, in line with the rate observed in recent months. This rate of expansion is only one or two percentage points below the rates observed prior to the Covid-19 crisis, reflecting the rebound in the real economy and the accommodative monetary policy followed by the State Bank of Vietnam.

In the first two month of 2021, the government collected VND286.7 trillion (US$12.46 billion) of revenues, which is 0.6% higher than the same period last year. This good performance – the first time that government total revenue is increasing since the beginning of the Covid-19 crisis a year ago reflects the ongoing recovery and the elimination of most tax incentives that were adopted in last April. 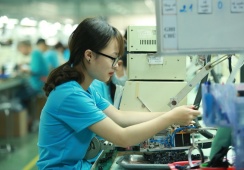