The Covid-19 death toll in Vietnam has reached 26 after two latest fatalities were confirmed on August 18, according to the Ministry of Health (MoH).

The patient, having one kidney removed in the past after suffering a urinary tract infection, was undergoing treatment at the Danang Lung Hospital when she succumbed to the Covid-19 disease.

On June 11, she was admitted to Ho Chi Minh City Oncological Hospital for a cancer operation and discharged on July 7. She did not come into contact with anyone except her daughter and hospital staff during her hospitalization.

On July 8, she flew back to Danang and remained at home. Two days later she became severely ill and was admitted to Danang Hospital for emergency treatment. She stayed there until July 21 before being discharged.

On July 23, she went to the hospital again to treat kidney-related problems. She was isolated after many people tested positive for the novel coronavirus at the hospital. The patient was tested on August 4 and found to have contracted Covid-19.

Since July 25, when local transmissions reemerged in Vietnam, Danang has recorded 359 cases with 22 deaths so far.

The MoH reported the second Covid-19 death on August 18, who was a former Covid-19 patient (Patient No.418) and died due to serious chronic diseases.

Patient No. 418, who had tested negative for SARS-CoV-2 four times on August 4, 10, 11 and 12, died on August 12 due to complications of chronic renal failure at Hue Central Hospital, the MoH said.

Another 53 Covid-19 patients in Vietnam discharged from hospital

Fifty three Covid-19 patients in Vietnam were discharged from hospitals on August 18, according to the MoH.

Among the latest recovereds, five were discharged from Quang Nam Central General Hospital, including Patients No.433, 643, 834, 773 and 622, all residing in the locality.

After their discharge, these 53 patients will undergo home quarantine for another 14 days.
According to the MoH, all Covid-19 positive cases in Quang Nam have responded well to treatment, even the elderly patients (one aged 100) and those with underlying health conditions.

At the time of writing, the number of Covid-19 cases in Vietnam stood at 989, 525 have recovered and 438 are under treatment. 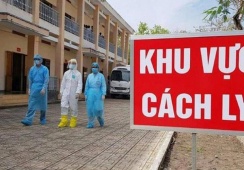