Vietnam, a candidate for the United Nations Human Rights Council (UNHRC) for the 2023-2025 term, has been seeking international experiences and support to protect lesbian, gay, bisexual, transgender, and intersex (LGBTI) from discrimination.

It’s on the way to build legal framework for the issue while public awareness of it has been improved but the gap between discussions and the reality remains wide, experts said in a workshop on “Protection against Violence and Discrimination based on Sexual Orientation and Gender Identity: International and Vietnam’s Experiences” held in Hanoi on May 27.

She said it requires dialogues contributed by international experts to help Vietnam promote its efforts on the issue, noting the LGBTI community in Vietnam faces no challenges.

In her opening remarks, UN Resident Coordinator a.i. and UNDP Resident Representative in Vietnam Caitlin Wiesen congratulated LGBTI organizations for their committed advocacy over the past decade which has contributed to important gains in terms of visibility and policy change to ensure LGBTI rights in Vietnam.

“Inclusive, sustainable development is best served when policy dialogue at all levels practices the core principle of ‘nothing about us without us’, which is particularly crucial for policies focused on minority groups in society,” said Wiesen.

She noted that meaningful participation of the LGBTI community is vital for effective and inclusive policymaking. The development or reform of any laws and policies concerning the human rights of LGBTI persons cannot be genuine and complete without meaningful engagement and consultation with the persons and communities they will affect.

Ambassador of Norway to Vietnam Grete Løchen said “Sexual and gender diversity exists in all countries and communities. LGBTI+ people have the same right to live free from the discrimination and violence, which still persists today and becomes even worse during the pandemic.”

According to her, it’s all about equal rights and being true to the SDG principle of leaving no one behind! As a staunch supporter of the UN and its SDGs, it is Norway’s priority to increase focus on equal rights, including the issue of discrimination based on sexual orientation. For LGBTI+ people it’s to live without stigma, shame, and discrimination”.

At the event marking the participation of Jessica Stern, Special Envoy on LGBTI+ Rights of the US, Ambassadors of Sweden, Argentina, Cuba, Mongolia, and South Africa, and representatives from UN bodies, ministries, national and development partners, as well as leaders of local LGBTI organizations, Le Thi Thu Hang said at UNHRC’s universal periodic review (UPR), Vietnam has approved and implemented a number of recommendations on protecting vulnerable groups.

Of the recommendations approved in UPR – Second Cycle in 2014 and UPR – Third Cycle in 2019, those related to protection against violence and discrimination based on sexual orientation and gender identity have been largely effective.

Caitlin Wiesen said UNDP recommended that the reporting on UPR implementation in the current cycle features good progress as well as areas for improvement in the protection of the human rights of LGBTI persons and organizations. She stressed the importance to include the vulnerabilities of the LGBTI community in the UPR reporting on the implementation of supported recommendations by Vietnam.

She commended the Government of Vietnam institutions for their important progress made in the legal development of domestic laws for LGBTI persons.

In 2014, the Marriage and Family Law achieved an important stepping-stone by removing provisions outlawing same-sex marriage. In 2015, the National Assembly amended the Civil Code to open the door to the option of legal gender marker change for transgender persons.

In 2015, the draft Gender Affirmation Law – the first-ever law on transgender persons in Vietnam is being developed by the Ministry of Health and will be submitted to the National Assembly for approval hopefully later this year.

In 2016, the Government, during its term as a member of the United Nations Human Rights Council (2014-2016), also voted in favor of a resolution on the protection against violence and discrimination on the basis of sexual orientation and gender identity.

These achievements resulted from consistent advocacy efforts and tireless work of local LGBTI organizations, combined with the political will of government institutions.

Notably, as part of the UPR Third Cycle, Vietnam received various encouraging recommendations regarding the rights of LGBTI persons and organizations, and their protection against discrimination and violence. 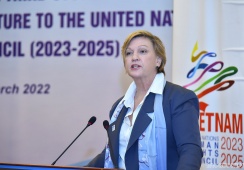