The Hanoitimes - Vietnam spent US$549 million on unexploded ordnance settlement in 2010-20. Nearly one fifth of the investment comes from international non-refundable aid.

Sen. Lt. Gen Vinh was speaking at a meeting held in Hanoi on January 8.

He said between 2010 and 2020, the total clearance area is estimated to reach more than 500,000 ha, including over 400,000 ha conducted by the Ministry of National Defence and the remaining by international organizations.

Vietnam has spent approximately VND12.6 trillion (US$549 million) on bomb and mine clearance in the past decade starting in 2010.

The Standing Board of the National Steering Committee on the Settlement of Post-War Unexploded Ordnance and Toxic Chemical Consequences (Steering Committee 701) has taken responsibility for handling 260 tons of o-chlorobenzylidene malononitrile (CS), zoning affected areas, and mapping places of residues.

He also asked the relevant agencies under the Ministry of National Defence to continue working for legitimate rights of Agent Orange/dioxin victims.

So far, Vietnam has roughly 163,000 war-related people contaminated with chemical toxins and more than 73,000 others who are their children, who are beneficiaries of monthly allowance and health insurance, local media reported.

UXO was scattered over Vietnam, Laos and Cambodia by U.S. bombers in the Vietnam War, at three times the volume of ordnance dropped in World War II, according to Project Renew, a non-governmental organization located in Quang Tri province, Vietnam.

In June 2019, staff at the US Congressional Research Service (a department within the Library of Congress) sent legislators an analysis of the US$400 million the US has spent on UXO clearance in Southeast Asia, VOA reported.

It said cleanup will probably involve several more decades and probably casualties. These human and dollar costs, as well as the long time that war legacies have lasted, are factors for legislators to consider, the report said. 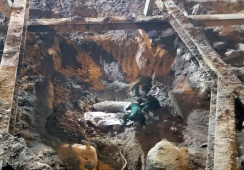