A low budget revenue in January is due to the fact that the economy is currently struggling with the ongoing Covid-19 outbreak.

Total state budget revenue in the first month of the year suffered a decline of 18.8% year-on-year to VND134 trillion (US$5.82 billion), according to the General Department of Taxation (GDT), citing the Covid-19 impacts and tax revenue foregone as a result of financial support programs as main reasons.

“State budget revenue is highly dependent on economic performance,” the GDT explained a decline of nearly VND5 trillion (US$217.4 million) year-on-year in revenue, particularly as the current Covid-19 outbreak is causing severe difficulties to operation in many economic fields such as aviation, tourism, services, and trade.

To aid businesses overcome difficulties caused by the pandemic, the government has cut the corporate income tax rate by 30% for those with revenue below VND200 billion (US$8.7 million) per year, leading to a further decrease of VND2.8 trillion (US$121.7 million) year-on-year in the state budget collection.

Upon breaking down, domestic revenue made up a lion share of the total revenue at VND131.5 trillion (US$5.71 billion), and crude oil exports of VND2.45 trillion (US$106.5 million).

In February, the GDT estimated a further decline in state budget revenue by 13% year-on-year to VND74 trillion (US$3.21 billion), as the one-week long Tet holiday in this month could play a key factor. 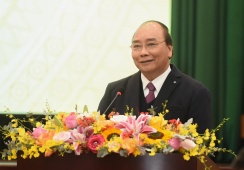