Vietnam stocks jump most in 11 years Wednesday amid global gains

The Hanoitimes - Analysts at MB Securities and Yuanta Securities reckoned Wednesday’s rally is a short-termed rebound.

Vietnamese shares experienced the strongest rebound on March 25 in nearly 11 years as investors bought across the board, encouraged by rallies around the globe on hope for the passage of a colossal stimulus package in the United States.

Sentiment was robust since the opening session, with strong buy of bluechips and battered stocks after recent plunges. As many as 301 tickers went up, versus 84 losers, while 39 others stayed still. Trading volume was heavy with 270.2 million shares worth VND4.89 trillion (US$208.2 million) changed hands.

The HNX Index of the Hanoi Stock Exchange regained the 100-point psychological threshold while the UPCOM Index rose 2.1%.

Foreign players extended their selling spree to the 32nd day, but the net value narrowed to VND368 billion (US$15.6 million).

Wall Street posted the best day since 1933 on expectation the White House and the Senate would reach a deal on a US$2 trillion stimulus package.

The positive sentiment on Wednesday many persist till the weekend despite foreign investors’ net sales, according to MB Securities.

The VN-Index is expected to continue going north and face a resistance territory of 695-710, Yuanta Securities predicted.

Analysts at both MB Securities and Yuanta Securities reckoned Wednesday’s rally is a short-termed rebound. 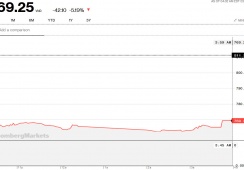