The move would help support the development of local supporting industries, particularly the automobile manufacturing and assembling in the 2019 – 2023 period.

The Vietnamese government has agreed to remove import tariffs for auto parts and accessories, which are currently cannot be manufactured domestically.

The decision, set to take effect from July 10, is part of the government’s Decree No.57 dated May 25, 2020 on amending and supplementing a number of articles of the Decree No.125 on export duty schedule, preferential import duty schedule and lists of commodities and their flat tax rates, compound tariff and “out-of-quota” tariff rate, aiming to increase the localization rate and enhance the competitiveness of Vietnam’s automobile industry.

In order to qualify for this new policy, enterprises must provide sales contract of auto parts with local auto manufacturers and/or assemblers, those that are given operation license by the Ministry of Industry and Trade.

Moreover, enterprises should have business license related to production of auto parts and accessories, as well as have their own car production facilities in Vietnam.

The review period for preferential tariff treatment for enterprises are from January 1 – June 30 or from July 1 – December 31, annually.

For parts and accessories that only require basic processing, rather than a thorough process to become final products, would not be entitled to the 0% tariff rate.

Local auto manufacturers previously voiced concern over the insufficient support from Decree No.125 for the automobile industry, as it failed to create considerable advantages for domestic cars over imported ones from other ASEAN countries.

The auto parts manufacturing sector in Vietnam currently enjoys incentive policies for investments, but such incentives are not remarkably attractive compared to other sectors, leading to low localization rates.

Moreover, domestically produced auto parts are also facing fierce competition from imported products in ASEAN, which are having zero import tariff under the effect of the ASEAN Trade in Goods Agreement (ATIGA).

Monthly data from the Vietnam Automobile Manufacturers Association (VAMA) revealed car sales in Vietnam are reported at 64,100 units in the first four months this year, down 36% year-on-year. 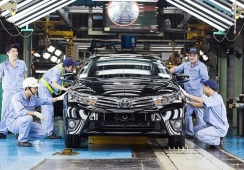