The Hanoitimes - For the first time, Vietnam would have a long-term strategy that ensures steady development of digital government in the coming years.

The Vietnamese government is set to complete an e-government strategy this year, a key step towards the formation of digital government, according to Minister of Information and Communications Nguyen Manh Hung.

For the first time, Vietnam would have a long-term strategy that ensures steady development of digital government, stated Mr. Hung at a hearing session at the National Assembly on November 6.

Mr. Hung said while the e-government is a computerization process of existing administrative procedures, a digital government is to provide new services to meet demands of the people and enterprises.

Specifically, the e-government would focus on online public services that government agencies have been providing for many years in the form of paper. A digital one would digitalize the government's operations in a platform that will provide new services with support from new technologies.

In a digital government, data is considered a new type of resource, and the decision-making process would be based on the analysis of data from various sources.

The connectivity and data sharing between government agencies mean the people only have to provide information once. Based on the data compiled, enterprises could provide new services, Mr. Hung noted.

So far, the government has completed a national exchange platform, he said, adding the Ministry of Information and Communications (MIC) has launched a national database portal (data.gov.vn) to provide open data.

On this basis, Prime Minister Nguyen Xuan Phuc is set to issue a plan to open the government's database, and consequently, Vietnam would be among a handful of countries globally to carry out such a task, Mr. Hung stated.

Regarding the issue of human resources for e-government, the MIC has proposed an initiative of 100 e-government experts, as such, each ministry and province/city would have one expert in this field.

In 2020, Mr. Hung expected Vietnam to have over 30% of online public services at advanced stage 4, the highest in a four-level scale of e-government.

For next year, Mr. Hung suggested the government set a target of providing 100% of online public services at stage 4, saying an ambitious goal would compel government agencies to change their modus operandi and create breakthroughs in the process.

5G network to implement in large scale in 2021

Regarding 5G, Mr. Hung said the country plan to deploy this next-generation network in a large scale in 2021. For the first phase, the minister expected 5G to be rolled out in major cities, industrial parks, research centers and universities.

The 5G technologies would be implemented in the existing 4G-infrastructure system, Mr. Hung said.

Once implemented, Vietnam would have a lot of 5G equipment with high quality and at affordable prices, in turn saving costs for mobile carriers, he stated. 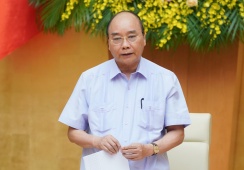