The Hanoitimes - Each year, Havana International Book Fair honors a notable writer or a renowned cultural figure and a distinguished international guest of honor.

Vietnam will be the guest of honor at the 29th Havana International Book Fair (Feria Internacional del Libro de La Habana in Spanish), one of the most highlighted annual events of the Caribbean island, according to Cuban News Agency.

‘The presence of this Asian country in the Cuban capital, which has recently celebrated the five centuries of its foundation, ratifies the historical and special relations between that nation and Cuba, which date back almost six decades of cooperation, brotherhood, and solidarity in the most diverse spheres of society and culture.” Cuban News Agency wrote.

The event, held between February 6 and 16, will be an opportunity for Cuban people to gain an overview of Vietnamese literature and understanding of the Southeast Asian country’s culture and customs.

Besides, it is a chance for Cuban and Vietnamese publishing houses to be able to exchange and seek cooperation.

The Havana International Book Fair was first held in 1982 as a biannual cycle, and since 2000 it began to take place annually. The event usually marks the participation of hundreds of publishing houses from many countries. In addition to book exhibition, the fair features several activities ranging from film, visual arts, music, and literature to history. 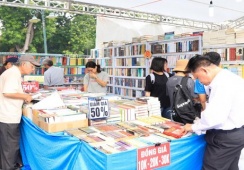