Vietnam to benefit most from global apparel manufacturing diversification

The Hanoitimes - Vietnam would remain a prime candidate for gains over the near term, according to Fitch Solutions.

Vietnam, along with Bangladesh, Cambodia and Myanmar, is poised to benefit most from shifts in manufacturing in the apparel space, according to Fitch Solutions, a subsidiary of Fitch Group.

Fitch Solutions said these countries have been expanding their presence over the years ahead as suppliers to the vast Chinese market, as well as growing their market share in other countries in North America and Europe at the expense of China.

This came at the fact that rising labor costs in China are pushing out low- to mid-range manufacturing to cheaper cost centers across Asia. This trend has already taken place for at least half a decade; however, Fitch Solution said it will be exacerbated by rising trade protectionism globally and geopolitical risks attached to operating in China, as relations between China and the West deteriorate.

According to Fitch Solutions, Vietnam and others have benefited from being close to raw material sources in China and India, having a large low-cost supply of labor, sufficient trade links with China and the rest of the world, and most importantly for some, the economic support of China.

Vietnam has been the most significant beneficiary from the shift in apparel manufacturing supply chains in recent years, and Fitch Solutions expected it to remain a prime candidate for gains over the near term.

Fitch Solutions attributed Vietnam’s success to a combination of factors: firstly, the abundance of young labor – around 70% of the total population is still in active age, and this demographic is expected to grow by 0.4% annually over the forthcoming decade; secondly, lower wages relative to China.

Moreover, the country’s political system is predictable and stable compared to others in the region. From a business environment and operational perspective, Vietnam scores 52.3 in the Fitch Solutions Operational Risk Index – this puts it in the middle of the scale and above Bangladesh, Cambodia and Myanmar.

Structural factors aside, Vietnam’s growing participation in free trade agreements (FTAs), which will soon include the EU-Vietnam Free Trade Agreement (EVFTA) from August 2020 (notably the EU accounts for 39% of total global textile imports), also positions it well to benefit from this trend.

Fitch Solutions suggested Vietnam had an early advantage due to its shared border with China as many Chinese producers looked to move to low-cost bases that were close enough to quickly cater to the growing Chinese market.

China is now the world’s second largest apparel market, worth an estimated US$320 billion (20% of the US$1.6 trillion global market); however, in the future, Fitch Solutions said, it could see Vietnam leveraging its FTA deals to gain access to markets globally.

However, as Vietnam moves up the value chain, leading to rising operational costs, this could stymie the apparel sector’s growth over the longer term, to the benefit of other regional neighbors such as Bangladesh, Cambodia and Myanmar.

As companies have looked to move out of China in recent years, Vietnam has not just been benefiting from an influx of apparel manufacturers but also other mid-range industries such as automotive and consumer electronics.

However, the Vietnamese government has announced that it intends to be more selective in its foreign investment over the medium term so as to move the economy up the value chain. Moreover, a general influx of foreign investment, government-led education and training programs to up-skill the population, and competition for labor will put upside pressure on wages, which could blunt Vietnam’s attractiveness for apparel producers who have low profit margins.

This contrasts with Bangladesh, Cambodia and Myanmar, whereby weak government resolve to up- skill the population and a lack of higher-value foreign and local investment to generate better jobs mean a lack of better paying opportunities for job seekers, which will continue to ensure a steady stream of low-skilled laborer and limited upside wage pressure for the respective apparel manufacturing industries in these countries. 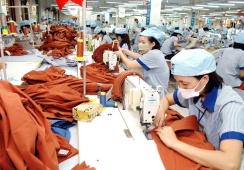 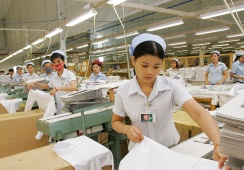