The financing mechanism under the private-public partnership (PPP) model would be essential to realize this goal.

The Vietnamese Government has set the timeline for 4,000 kilometers connecting each region with the national expressway network, which will be ready by 2030.

The construction project, under the Public-Private Partnership (PPP) performance, is part of Prime Minister Pham Minh Chinh’s conclusion on the plan to expand Vietnam’s expressway network, which covered nearly 1,200 kilometers of expressway built in the past 20 years, in the 2021-2025 period, with a vision to 2030.

“This is a political mission and our responsibility before the Party, the State and the People requiring the participation of the entire political system,” stressed Chinh, saying PPP contracts would be the main financing mechanism.

“State budget could only fund a part of the capital demand for such huge works, and in this case, investment from private sectors would be a decisive factor,” he added.

The Prime Minister has called for balanced investment among regions, especially in the Mekong Delta, North West, Central Highlands, South Central, and the key economic zones, while focusing on major projects such as the Eastern North-South Expressway, ring roads in Hanoi, and Ho Chi Minh City, that are in line with national development strategy and ensure investment efficiency.

To realize these ambitious targets, Chinh noted the necessity to change the mindset in state management and push for greater decentralization in making investment-related decisions.

“Provinces and cities that want to have expressway have to actively join the investment process and be responsible for the site clearance works,” Chinh said.

“The government would support a part of investment cost with supporting policies,” he added.

“Accountability is essential throughout the process to prevent corruption and groups of interest, with the interests of the people and the state being put at the foremost,” Chinh continued.

Among specific targets, Chinh urged the Ministry of Transport (MoT) to complete the Eastern North-South Expressway by 2025, taking the total expressway length in Vietnam to 3,000 km. The figure would eventually rise to 5,000 km five years later. 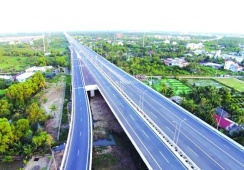