The Hanoitimes - Based on newly-updated data, Vietnam could export around 6.5 – 6.7 million tons of rice in 2020 without any significant impact on food security.

Vietnam's Ministry of Industry and Trade (MoIT) on March 28 proposed resuming rice export but expected to put the activity under strict supervision on a monthly basis, local media reported.

The decision came after the MoIT reviewed data collected from rice exporters, the Vietam Food Association (VFA), the Ministry of Agriculture and Rural Development, the General Department of Vietnam Customs (GDVC) and other relevant agencies.

In April, Vietnam could export 400,000 tons of rice, while the export volume in May is subject to Prime Minister Nguyen Xuan Phuc’s approval in the final week of April.

The estimated volume for rice export in April and May is 800,000 tons, after having excluded 300,000 tons in national reserves and 400,000 tons for possible emergencies in the upcoming two months. The volume of rice export in the two-month period would represent a decline of 40% year-on-year.

To resume rice export, the MoIT suggested the government to speed up the purchase of 300,000 tons of rice for national food reserves for this year’s plan. Meanwhile, rice export could only be conducted via international border gates, where the GDVC has the required equipment to track the exported volume in real time.

According to the MoIT, 20 major rice exporters must sign an agreement with at least one super market chains to back up 5% of their rice stock in case of emergencies.

On March 25, the Government Office issued the instruction of Prime Minister Nguyen Xuan Phuc on evaluating current rice export and supply. One day earlier, the GDVC requested municipal customs authorities to halt rice export as suggested by the Ministry of Industry and Trade (MoIT).

In a surprise move, the MoIT made an U-turn, citing inconsistent data between what the ministry had obtained and that provided by local enterprises.

Meanwhile, the Mekong Delta is suffering saltwater intrusion that damaged tens of thousands of hectares of paddy.

Vice Minister of Industry and Trade Tran Quoc Khanh said Vietnam could face a risk of rice shortage if it continues to export rice at the same pace as in the last two months.

However, based on newly-updated data, Vietnam could export around 6.5 – 6.7 million tons of rice in 2020 without significant effect on food security. 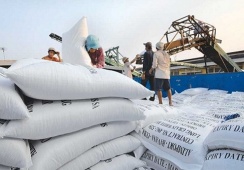 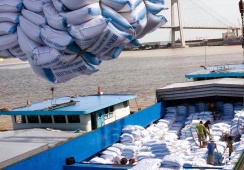