While Vietnam reported an estimated trade deficit of US$1 billion in December, the country is on track to post an all-time high trade surplus of $19.1 billion in 2020, far exceeding the record figure of $10.9 billion in 2019, the General Statistics Office (GSO) has said in a monthly report.

On breaking down, the domestic-invested sector is estimated to post a trade deficit of $15.5 billion and foreign-invested firms have recorded a surplus of $34.6 billion.

In a difficult year for global trade as a result of the Covid-19 pandemic, the domestic-invested sector has shown its resilience, as its exports are expected to decline by 1.1% year-on-year to US$78.2 billion during the period, accounting for 27.8% of the country's exports. Meanwhile, FDI firms have reaped $203.3 billion from overseas shipments, up 9.7% and accounting for 72.2% of the total.

In December, Vietnam has exported goods worth an estimated $26.5 billion, up 5% inter-monthly, while imports are estimated to increase by 11.4% to US$27.5 billion.

Among Vietnam’s key export staples, phones and parts are predicted to earn the largest export turnover in 2020 at $50.9 billion, down 1% year-on-year and accounting for 18.1% of Vietnam’s total exports.

In addition, electronic products, computers and components have earned an estimated $44.7 billion, up 24.4% year-on-year; followed by garments ($29.5 billion and down 10.2%).

Meanwhile, China continued to be Vietnam's largest supplier, selling $83.9 billion worth of goods to Vietnam, up 11.2% year-on-year.

South Korea claimed the second place by exporting $46.3 billion worth of goods to Vietnam, down 1.5% year-on-year, followed by ASEAN countries with $30 billion, down 6.9%. 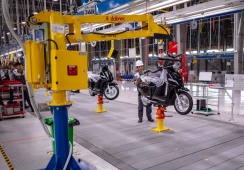