Vietnam, US businesses sign contracts worth over US$2.2 billion

The contracts will contribute to a balanced bilateral trade and economic relations for sustainable and mutual benefits.

Vietnam's budget carriers Vietjet and Bamboo Airways have signed contracts worth over $2.26 billion with CFM International and GE Aviation.

The signing ceremony took place on September 21 (local time) during State President Nguyen Xuan Phuc’s trip to the US to attend the 76th UN General Assembly in New York from September 21 to 24.

Under a long-term and strategic partnership, both Vietjet and CFM International would continue to cooperate in aircraft engine maintenance, technology transfer in engine production, and aircraft engineer training.

The move is expected to turn Vietnam into a regional hub for aircraft maintenance and reparation.

CFM International is the world’s leading supplier of jet engines for commercial airplanes, and also the main provider to nearly 100 aircraft of Vietjet Air.

The strong partnership between the two has contributed a big part to promote Vietnam-US a balanced trade relation for sustainable and mutual benefits.

On the same day, Bamboo Airways signed a contract with GE Aviation to purchase the latter’s GEnx engines for the airline’s 787-9 aircraft, worth $2 billion.

The shipment is set to be delivered in 2022, which helps Bamboo Airways to operate the Vietnam-US direct flight route in the future.

On this occasion, Bamboo Airways also inked a deal with CFM International on selecting LEAP-1A engine and maintenance services for its entire fleet of 50 A320 Neo aircraft.

The move came after Bamboo Airways officially announced the launch of its Vietnam-US flight route with AVIAWORLD as its official representative in the US.

US Transport Security Administration (TSA) has previously granted clearance for the airline to operate the first direct flight between the two countries, set to commence since early 2022 with 3 flights per week.

To prepare for future international flights, Bamboo Airways has cooperated with the International Air Transport Association (IATA) for the application of IATA Travel Pass, a mobile app for travelers to store and manage their verified certifications for Covid-19 tests or vaccines, in their flights. 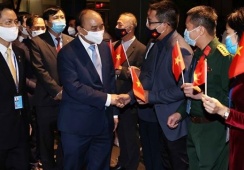