Vietnam warned of troublemaking transshipment from China, S.Korea to US

Vietnam should take stronger measures related to origin of goods and products to avoid risks of lawsuits or being taken advantage of by other countries to evade US import tariffs.

Vietnam should be careful not to become a transshipment point for China and South Korea in re-routing their exports to the US and circumvent levies, economists of the Vietnam Institute for Economic and Policy Research (VEPR) have warned.

“Being a deeply integrated economy with growth driving forces relying heavily on international trade, Vietnam is highly susceptible to external shocks, including policies changes from major economies or regional and global tensions,” said Nguyen Duc Thanh, former director of VEPR, at the launch of the think tank's annual economic report on June 17.

The US – China trade war, and to a lesser extent, the tension between South Korea and Japan, caused investors to shift investment to countries less affected by friction.

As a result, more and more multinationals are looking for an alternative for China and South Korea, Thanh stated.

In this circumstance, Vietnam, with a dynamic economy and member of major free trade agreements, including the Comprehensive and Progressive Agreement for Trans-Pacific Partnership (CPTPP), EU – Vietnam Free Trade Agreement (EVFTA) and the upcoming Regional Comprehensive Economic Partnership (RCEP), among others, is emerging as an attractive alternative to China.

For this year, although the Covid-19 pandemic has caused a major disruption to global value chain, the US remained Vietnam’s largest buyer spending US$25.11 billion on Vietnamese goods in the first five months, up 10.6% year-on-year and accounting for 25.1% of Vietnam’s total exports.

VEPR’s report suggested Vietnam to review the tax or land preferential policies for foreign-invested companies, in order to create a more equal environment for domestic firms.

Moreover, the country should put in places tighter measures related to origin of goods and products to avoid risks of lawsuits or being taken advantage of by other countries to evade US import tariffs.

With the removal of the social distancing earlier than expected (from the end of April compared to the expected end of May before), VEPR has revised up Vietnam's economic growth to be higher than the previous forecast of 4.2% for optimistic scenario.

The most optimistic scenario is based on the assumption that the disease is completely controlled domestically by the end of April and the economic activity gradually returned to normal. Meanwhile, the world has begun to relax lockdown measures since the beginning of June, helping Vietnam's goods export industry grow well in the second half of the year.

However, economic activities in the field of tourism, accommodation and passenger transport are still reserved and only gradually recover.

With this optimistic scenario, Vietnam's economic growth is forecast to reach up to 5.5% in 2020.

Under the neutral and pessimistic scenarios, the pandemic is presumed to recur and countries must extend the lockdown period to the second half of the third quarter, even the fourth quarter of 2020. The impact of Covid – 19 on the agriculture, forestry & fishery, manufacturing sector and service sector will be more serious. Economic growth in 2020 might be only 3.9% in the neutral scenario, or just 1.7% in the pessimistic scenario.

In line with the current short-term policies to mitigate the negative impacts of Covid-19, Vietnam should continue working on longer-term policies to improve macroeconomic foundation and reduce future risks, stated VEPR.

In all situations, inflation, interest rates, and exchange rates need to be kept stable. Diversification of export/import markets needs to be paid more attention to to avoid heavy dependence on some major economic partners.

In this time of difficulties, many inadequacies in managing economic policies have been revealed, so efforts to improve the institutional environment need to be sustained. Especially, Vietnam should gradually build a fiscal buffer to prevent external shocks, the report suggested.

VEPR’s GDP growth forecast is in line with Prime Minister Nguyen Xuan Phuc’s estimation of  an economic expansion of over 5% for this year, significantly higher than the International Monetary Fund (IMF)’s estimate of 2.7%. 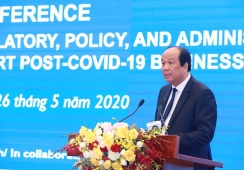