The Hanoitimes - Many retailers in phone and electronics segments focus on developing online channels to survive during the coronavirus pandemic period.

To survive adverse effects of the coronavirus pandemic, many Vietnamese tech retailers have quickly boosted their sales on online platforms as their physical stores nationwide have to close until April 15 to comply with the prime ministerial directive stipulating measures to combat the pandemic.

Mobile World Investment JSC (MWG), the largest tech retailer in Vietnam, saw a surge in demand in online shopping since the beginning of April as more than 10% of its 2,000 phone and electronics stores, mainly in Hanoi, have to close. Dang Thanh Phong, PR manager of MWG, told Hanoitimes that its revenue from online sales accounted for 13% of the total phone and electronics revenue in March, higher than that of the previous months.

Due to the closure of its stores, sales in brick-and-mortar stores slightly dropped in March to the levels lower than those of January and February, according to MWG's CEO Doan Van Hieu Em. During the pandemic period, online sales in some typical categories such as refrigerators, tablets and laptops increased by 200% compared to the pre-pandemic period. In the first three months this year, sales in the segments recorded 40% of total 250,000 products for 2020’s plan.

Online sales of another retailer, FPT Digital Retail JSC (FRT), also reached an increase of 40% between March 28 and April 2 at street stores prior to the business restriction under the government directive on curbing the pandemic expansion. The demand for online shopping of mobile products, tablets and laptops is increasing for learning, working and entertainment at home in the context of the nationwide social distancing period in place from April 1. In March alone, FPT Shop's revenue from the online segment rose 46% compared to February.

“The demand for mobile products changes a little bit during the pandemic period, however, our FPT Shop stores in the first three months posted positive business results as planned,” a representative from FRT told Hanoitimes.

MWG’s Chairman Nguyen Duc Tai said at an online shareholders meeting on April 2 that mobile phones and electronics products used to be upmarket items, so in the context of the pandemic outbreak, they might be not a priority of many local consumers. However, the retailer’s revenue has not declined as Duc Tai anticipated. “Perhaps, there is a decline in demand from a few people who prefer to buy new and latest-version products,” he said.

According to Lazada, one of the top e-commerce platforms, orders for technology goods also increased in recent period. In March only, sales of mobile phones and tablets saw a seven-fold increase compared to the previous month, of them, five mobile phones were the five best-selling items according to the e-commerce platform’s data, which is explained by the increasing need to work from home in the social distancing period.

According to local insiders, during this period, the trend of shopping has shifted notably from offline to online.

Survival after the pandemic ends

The largest consumer electronics retailer’s chairman predicted that the worldwide pandemic would take its toll in businesses worldwide, including in Vietnam. Total demand on mobile and electronics gadgets in Vietnam will decline as the pandemic is expected to reduce local consumers’ incomes as well as due to sport events postponement this year. As such, he added, many players in the retail industry would suffer from the pandemic period.

Another mobile chain retailer, Hanoi-based CellphoneS, is applying cost-cutting measures such as reducing store rent, advertising budget and non-fixed expenses to struggle in the pandemic time. It also tries to maintain sales by reducing prices and increasing promotion programs; and promoting selling via phone and online to stimulate purchasing power.

Small-size chains like 24H Store and Di Dong Viet contemplate cutting employees’ wages or even salaries due to the closure of physical stores in this period.

MWG has prepared plans for some scenarios when the pandemic is over. The company’s current advantages rely on online system supported by information technology talents, call-center and in-house technical staff, and tens of thousands of employees participating in delivery. To reach its goal for 2020, it also plans to deploy promotion campaigns after the pandemic ends.

For Thegioididong and Dien May Xanh, mobile and consumer electronics chains account for nearly 80% of total revenue and which will continue contributing to its growth in total revenue and profit this year, CEO Hieu Em added.

“The Covid-19 pandemic period is time to sort out businesses. Those who have good capacity, technology platform and human resources will survive and win,” MWG’s Chairman Tai underlined. “We will certainly take over the market shares and soon lead the top leading group,” he said. 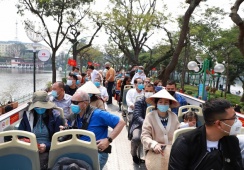 Vietnam e-commerce market to surpass US$17 billion in 2023: GlobalData