MoFA's Spokesperson Le Thi Thu Hang made the statement at the press conference on April 8 when answering a question raised by a foreign media outlet on the deployment of Gepard 3.9-class guided missile frigate Quang Trung in Spratly Islands (Truong Sa in Vietnamese).

She said the ministry has no information on the dispatch.

The question was raised following the massive intrusion of more than 200 Chinese vessels since early March in Whitsun Reef in Spratly Island of the East Sea (referring to the South China Sea).

But the spokeperson affirmed that “Vietnam’s relevant agencies are keeping an eye on the situation in the East Sea, activating the country’s rights to sovereignty protection and jurisdiction at sea and on land that are in line with international law and the UN Convention on the Law of the Sea (UNCLOS) 1982.”

In a press conference two weeks ago, Hang said the intrusion of Chinese vessels into Grierson Reef (Dao Sinh Ton Dong in Vietnamese) [which covers Whitsun] violated Vietnam’s sovereignty and demanded China to stop the violations. 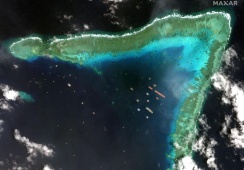