Vietnam would be among a handful of nations maintaining positive economic growth this year, according to a World Bank expert.

Vietnam’s highly effective Covid-19 countermeasures would help the country’s economy recover from the pandemic much faster than regional peers, according to David Hutt, a journalist specializing in Southeast Asian politics.

During the outbreak of the pandemic, the Communist Party of Vietnam (CPV) and the government have taken responsible steps to protect people’s lives, Hutt was quoted by the BBC News as saying.

Through drastic and timely measures to contain the pandemic and support those affected at the same time, Vietnam has reiterated its stance on “leaving no one behind”.

These actions have built up trust among the Vietnamese citizens in the government that they are protected, therefore, this crisis also showcased the unity of Vietnamese people, stated Hutt.

The Diplomat, meanwhile, looked deeply into Vietnam’s efforts and stressed the underlying factor that enables the Vietnamese government’s success is the mobilization of nationalism.

“The government has framed the virus as a common foreign enemy and called on the unity of the population to defeat it, echoing the enduring history of a nation always threatened by foreign invaders,” wrote The Diplomat on April 18.

In addition, the government has positioned itself as an effective source of leadership during the pandemic by providing information with transparency.

By being transparent and proactive in communicating with the public, the government was able to gain and maintain public confidence. In a Dalia Research survey of 45 countries asking about public opinion of government responses to the pandemic, 62% of Vietnamese respondents said that the government is doing the “right amount,” topping the survey’s average.

More work to keep the economy on track

Looking at Vietnam’s economic prospective, Jacques Morisset, lead economist at the World Bank in Vietnam, expressed his belief that the country would be among a few that would maintain positive GDP growth this year, albeit at a lower-than-expected rate.

In an interview with the Vietnam National Television, Morisset said Vietnam is well-positioned to launch an economic recovery, mainly thanks to its success in containing the pandemic and good economic base.

While the country achieved a high GDP growth rate of over 7% in 2019, Vietnam still has room to maneuver its monetary policy, not to mention a positive balance of payments.

Morisset added the government’s supporting programs have been significant to the people and businesses, referring to a credit aid package worth VND300 trillion (US$12.87 billion), a VND180-trillion (US$7.63 billion) fiscal stimulus package in forms of delay of payment of value-added tax, corporate tax and income tax, and a financial support package for vulnerable people worth VND62 trillion (US$2.7 billion),

According to Morisset, Vietnam’s economic growth is largely dependent on the domestic market. Given the government’s swift actions to help local businesses resume operations, Vietnam could be optimistic regarding this factor, stated Morisset.

Moreover, as an open economy, Vietnam also relies on demands from its major markets. A speedy recovery of global economy, therefore, would bring huge benefits to Vietnam, he added.

Nikkei Asian Review suggested when it comes to the Covid-19 pandemic, the country is winning global praise for containing cases and reopening for business at lightning speed.

The speed with which Vietnam claims to have flattened the infection curve exudes skill and nimbleness, it said, adding zero official deaths in a nation of 96 million is quite a feat.

Nikkei is on the same wave length with the World Bank’s economist that Vietnam has room to support growth internally. The State Bank of Vietnam, the country’ central bank, could indeed cut the benchmark interest rate, as it did in March from 6% to 5%. There is fiscal space to finance big, job-generating infrastructure projects.

However, much work remains to be done. As global uncertainties are still growing, Vietnam must move faster before “shock waves upending global growth” hit the export-driven economy again.

Among measures Vietnam should consider, Nikkei expected Vietnam to act faster to tackle corruption, strengthen the banking sector and diversify the economy away from exports.

At the same time, Vietnam must invest more in education and training to boost productivity. It should shrink the state sector to make room for startup companies, stated Nikkei.

Prime Minister Nguyen Xuan Phuc in a government meeting on May 6 expected Vietnam to achieve a GDP growth rate of over 5% this year, significantly higher than the International Monetary Fund (IMF)’s estimate of 2.7%. 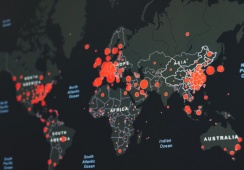 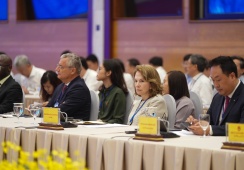 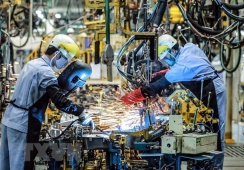