Prime Minister Nguyen Xuan Phuc expected the soon ratification of International Labor Organization Convention No.87 on Freedom of Association and Protection of the Right to Organize.

Each government agency is assigned with specific tasks with the aim of implementing the EVFTA efficiently and ensuring the full realization of Vietnam’s commitments in the deal.

Local authorities and agencies are tasked with disseminating information and regulations under the EVFTA as well as those of EU member countries to the business community; perfecting existing institutional frameworks; building up competitiveness and training high quality human resources; speeding up the ratification of International Labor Organization Convention No.87 on Freedom of Association and Protection of the Right to Organize, among others.

Mr. Phuc expected those under direct impacts of the EVFTA, including farmers, fishermen, business associations and enterprises, among others, should be given priority in receiving information related to the deal.

Meanwhile, Vietnam would continue to promote trade and investment activities in EU countries, so that European investors would have more understandings about business and investment opportunities in Vietnam.

Mr. Phuc requested the Ministry of Industry and Trade, along with other agencies, to continue providing training for micro, small and medium enterprises to enhance competitiveness and set up plans to meet international commitments, so that they could further integrate into global and regional supply chains, as well as taking advantages of the EVFTA.

The EVFTA, officially signed last June after six years of negotiations, has been dubbed “the most ambitious” FTA the EU has ever reached with a developing country, according to the European Commission (EC). It includes not only the almost full elimination of bilateral tariffs, but also a substantial reduction of non-tariff barriers. Moreover, it includes provisions to protect intellectual property, labor, environmental standards, and fair competition, while promoting regulatory coherence.

Meanwhile, the EC estimated the bloc’s GDP would be added US$29.5 billion by 2035, along with additional growth of 29% in exports to Vietnam. 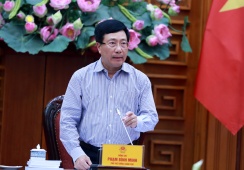