It is no doubt that 2019 was another successful year for Vietnam’s economy, putting the country in a favorable condition to achieve all socio-economic targets set for the 2016 – 2020 period.

Hanoitimes introduces the first part of Vietnam's top 10 economic events in 2019, which was a challenging year for the world economy, but Vietnam has been able to pick up the growth momentum from last year and ended 2019 with high notes.

1) Outstanding GDP growth in the region

In a context of global slowdown, not to mention the ongoing US – China trade war, a 7.02% expansion of the local economy indicated efficient state management and strong efforts of the government, stated the GSO.

This is the second consecutive year that Vietnam’s economy expands over 7% after GDP growth reached a 10-year high of 7.08% in 2018. Meanwhile, a low inflation rate of 2.79% makes such economic growth more significant, said Deputy Prime Minister Vuong Dinh Hue at a meeting on December 25.

2. Signing of EVFTA and enforcement of CPTPP

The European Commission has described the EVFTA as the most “ambitious” free trade deal and also the first of its kind the bloc ever concluded with a developing country, while Prime Minister Nguyen Xuan Phuc said the deal would lay a strong foundation for Vietnam to further integrate into the global market.

It is estimated that the EVFTA will add 0.1 percentage point (ppt) on average to Vietnam’s real GDP growth each year based solely on its trade impacts, according to HSBC’s report.

The 11-nations deal covers economies representing around 13% of global economic output, including third largest economy Japan, and 500 million people. It includes tariff cuts and non-tariff barrier removal  among its members and is designed around high standards on human rights, labor practices, and environmental standards.

It may be not a coincidence that in the first year of the enforcement of the CPTPP that Vietnam’s trade turnover surpassed the US$500-billion mark for the first time in 2019, resulting in a record trade surplus of US$9.9 billion.

3. Politburo’s Resolution No. 50 on greater efficiency of FDI until 2030

On August 20, 2019, the Politburo, Vietnam's supreme decision-making body, issued Resolution No. 50 providing guidance on perfecting the legal framework and policies towards greater efficiency in foreign direct investment (FDI) until 2030.

According to the resolution, foreign investment has contributed significantly to state budget revenue and macro-economic stability. However, the existing policies have not fully covered the actual practices, including fragmented and inconsistent incentive policies, as well as inefficient dispute-settling capabilities of government agencies.

In this regard, it is essential for Vietnam to be selective in approving FDI projects, focusing on those using modern and environmentally-friendly technologies which would create high added value with positive spill-over effects, allowing local companies to integrate deeply into the global supply chain, stated the resolution.

Vietnam improves the most among 141 economies, up 10 places to rank 67th in terms of competitiveness, according to the latest Global Competitiveness Report 2019 released by the World Economic Forum (WEF).

Out of the 12 pillars that made up the assessment, Vietnam scored the highest with 81 points in Health, ranking 71st in this field, while the lowest was innovation capability with 37 points at the 76th rank.

The ranking maps the competitiveness landscape of 141 economies through 103 indicators organized into 12 themes.

International organizations and the world community also regarded Vietnam as a spotlight of regional and global economy. In the US News & World report, the country ranked eighth among the best economies for investors in 2019, up 15 places against 2018, overcoming regional peers in Southeast Asia, including Malaysia, Indonesia and Singapore.

On February 19, 2019, the Ministry of Agriculture and Rural Development (MARD) announced the outbreak of the African swine fever in Vietnam, which caused high mortality rates in pigs. Since then, the fever has spread to all 63 provinces in Vietnam, forcing the culling of some six million pigs, equivalent to 340,800 tons of pork or 9% of Vietnam’s pig tally, and nearly tripling prices due to concern of pork shortage.

This resulted in total pork supply in 2019 of 3.3 million tons, down 13.8% year-on-year, causing pork prices to increase 19.7% in December against the previous month and adding 0.83 percentage points to overall CPI growth. 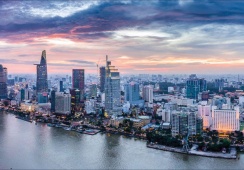 Vietnam improves the most in global competitiveness report: WEF