The Hanoitimes - The commercial pilot will help the telecom carriers assess their technology and the market size before officially providing 5G commercial operations.

Military-owned Viettel has been allowed to test 5G in Hanoi with a maximum of 140 base transceiver stations while state-owned MobiFone can do so in Ho Chi Minh City with 50 stations. Their licenses will be expired on June 30 next year.

Viettel and MobiFone must ask for authorization from the Ministry of Information Technology and Communications if they want to increase the scale of the pilot operation. They must also comply with regulations on the management of telecom quality, ensure network and information security.

The first 5G phone call in the country was made on January 17, 2019, using gNodeB, a technology infrastructure with both hardware and software developed by Viettel. The milestone came just eight months after Vietnam's first 5G call using hardware by a foreign provider.

At that time, Tao Duc Thang, deputy general director of Viettel, said the successful conclusion of 5G connection tests will be followed up by a large-scale 5G roll-out in Hanoi and Ho Chi Minh city before the official commercialization in late 2020.

He added that considering the current progress, Vietnam might become one of the first countries in the world to successfully roll out the novel telecom standard for commercial use.

According to Vu Hoang Lien, chairman of the Vietnam Internet Association, 5G mobile technology holds a predominant advantage to its predecessors in frequency, bandwidth, speed and latency, which guarantees a better user experience.

Considering the superior capacity for response time and plural connections, 5G will make ways for the Internet of Things (IoT), automation and robot science applications, Mr. Lien said, adding that he is positive about Vietnam’s readiness for 5G in regards of both demand and infrastructure capacity. 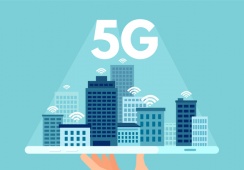