What to know about Tet holiday in Vietnam?

The Hanoitimes - You should know do's and don'ts to avoid awkward moments in Vietnam during Tet celebration.

Despite the never-ending debate about maintaining or getting rid of the Lunar New Year or Tet festival in short, it remains one of the most anticipated celebrations of the year among Vietnamese and expats thanks to the beautiful traditional values, singular and meaningful rituals.

Tet Nguyen Dan is a Sino-Vietnamese word for Feast of the very First Morning of the year, which is celebrated to mark the advent of spring according to the Lunar Calendar. Tet takes place from the first day of the first month of the Lunar calendar (around late January or early February) until at least the third day. This year, the first day of Lunar year will fall on January 25 on Gregorian Calendar.

Preparation as Tet is coming

This year, Vietnamese workers (those working away) will take days off from January 22 to return home, prepare for the gathering of family and friends as well as the worship rituals before and during Tet holiday.

Before the Tet holiday, Vietnamese people usually clean and tidy up their houses and altars in the belief that the act would eliminate bad luck, erase unhappy and messy things of the past year and draw the positive energies for the new year.

Legend has it that, the Kitchen God returns to heaven on the 23rd day of the twelfth month of the Lunar calendar to deliver his annual report on the family affairs to the Jade Emperor. As a result, all the cleaning work should be done before this date.

Around two weeks before the celebration, streets in big cities such as Hanoi, Ho Chi Minh City or Danang become a hustle and bustle of colorful activities. Every one is busy doing something relating to Tet. Some rush to complete their work before the year-end deadlines, others hurry to wrap things up before coming back to their home towns.

Such ornamental trees such as kumquat, peach (in the North) or ochna (in the South) are indispensable on the Tet holiday as they carried the breath of spring with new buds, flowers, and leaves.

When it comes to worship, the people prepare a tray of five different fruits, each with its own color to offer to the ancestors on the altar.

Tet is the special time of the year in which people believe the positive or negative energies in those days may linger the whole year. There some important do's and don'ts on Tet that you should know:

• Avoid entering anybody’s house on the first day of Lunar New Year without an invitation as it is the first person stepping in the door who set the mood for the entire year. Vietnamese people also believe the zodiac animal of the first foot of the new year is associated with also determines the outcomes of the next year.

• Do not ask for money on Tet as it is a premonition of an economic exhaustion year.

• Avoid debating unhealthy topics on Tet, which is believed to shoo the luck and happiness away.

• Do not sweep the house on the very first day of the lunar year as it means sweeping all the fortune of the owners.

• Squids, ducks, etc. are considered to bring bad luck so their meat is not favorable dish for Tet.

• Avoid working on the 5th of the New Year as it is not a good day for departures since it is considered to be the anniversary of the death. It is also advisable not to start working on that day. 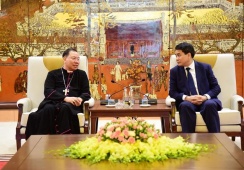