The Hanoitimes - Vietnam is believed to do all the right things to protect its people and foreign nationals in the country.

Vietnam has so far appeared to be one of few countries to successfully contain the spread of coronavirus, and the steps it’s taken have received compliments from a number of international experts and agencies, including the World Health Organization (WHO).

The first and foremost reason makes the country outstanding in the midst of the Covid-19 pandemic is that Vietnam is doing all the right things, in which, placing the health and well-being of its people and foreign visitors, i.e., all people, above all else. The result so far is relatively few confirmed cases of the coronavirus, VnExpress cited Mark A. Ashwill, managing director and co-founder, Capstone Vietnam, a full-service educational consulting company with offices in Hanoi and Ho Chi Minh City, as saying.

Vietnam, which is placed uncomfortably close to China, the initial epicenter of the coronavirus pandemic that now sweeps across the world with more than 1.5 million infections, has confirmed 255 people infected with SARS-CoV-2, including 128 convalescents, and no death has been reported, statistics by Johns Hopkins and the Ministry of Health showed on April 9.

After the pandemic broke out in China’s city of Wuhan in December 2019, Vietnam immediately reacted to the situation, conducting a number of precautionary measures in big cities that are destinations of Chinese visitors.

Deputy Prime Minister Vu Duc Dam, who is also head of the National Steering Committee for Covid-19 Prevention and Control, said that the government was proactive and prepared for potential risk before the country detected the first infection.

Vietnam is also applying a kind of war rhetoric in its fight against the coronavirus.

Although the outbreak at that time was still confined to China, Vietnam’s government defined a consistent pilot in which it considers “fighting epidemic like fighting the enemy.”

Prime Minister Nguyen Xuan Phuc said “Every business, every citizen, every residential area must be a fortress to prevent the epidemic.”

This has hit a nerve with many Vietnamese, who are proud of their ability to stand together in a crisis and endure hardships, Germany-based international broadcaster Deutsche Welle (DW) reported.

The first coronavirus patient was found in Vietnam on January 23. He is a Chinese man who came from epicenter Wuhan.

Mandatory mass quarantine is one of the toughest precautionary measures that Vietnam has taken since the beginning of the outbreak.

Vietnam had required two-week quarantine for people coming and traveling across affected areas before it imposed the restriction on all people entering the country.

People under quarantine are housed at military barracks and concentrated facilities in which they get free meals, transport fees, and health checkup regardless of Vietnamese nationals or foreigners.

On March 22, it closed borders to all foreigners as coronavirus infection toll approached 100, except for entrants who are experts and holders of diplomatic and official passports.

According to Berlin-based Dalia Research, Vietnam earns highest public trust in the government response to Covid-19 globally. Accordingly, 62% of locals said that they are happy with the government’s response to the pandemic.

In addition, although there are no studies to prove it, the mood on social media and conversations with Vietnamese indicate that the majority of the public agrees with the government measures.

They are proud that Vietnam is faring comparatively well in meeting the crisis. Among key leaders, the country’s most popular coronavirus fighter, Deputy Prime Minister Vu Duc Dam, has been celebrated on Facebook as a “national hero.”

The government of Vietnam has stated since the initial stage of the new coronavirus outbreak that it will do anything to protect local people, even at the expense of economic benefits, Prime Minister Nguyen Xuan Phuc has reiterated at a number of government meetings.

The projected economic costs, which will hit Vietnam hard despite the low case numbers, have also been widely accepted by the population.

Vietnam is imposing a two-week stay-at-home order until April 15 to curb the spread of the virus, during which non-essential businesses are shut.

State-controlled media have also launched a massive information campaign. The Ministry of Health even sponsored a song “Ghen Co Vy” on YouTube about proper hand-washing that has gone viral. 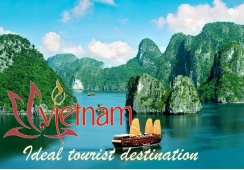 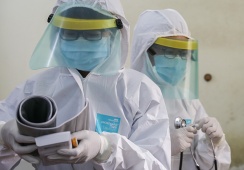