The Hanoitimes - More investments in infrastructure of the Hoa Lac High-tech Park are needed to lure more investors.

The Hanoi city government longs for becoming a science and technology hub of Vietnam, region and world by luring more investment in the Hoa Lac High-tech Park on the city's outskirts, according to its leaders. .

Hanoi is willing to support the park

In particular, the Hanoi People’s Committee would make upfront payment for the park's Management Board for site clearance for the remaining area of the park, and for completing construction of resettlement areas.

Speaking at the meeting between Hanoi's leadership and the Minister of Science and Technology on July 10, Hanoi’s mayor Nguyen Duc Chung said that the city has cooperated closely with the Management Board of the park in five fields including investment promotion activities and coordination in handling investment licensing procedures, among others.

According to Hanoi’s mayor, the water supply network for the park would be ready immediately and handed over to Hanoi Clean Water Company.

Minister of Science and Technology Chu Ngoc Anh said since the park's inception in 1998, site clearance work has taken up most of the construction time. Now, after more than 20 years, the park is taking shape with a synchronized ecosystem and ready to produce "Made in Vietnam” products.

Acting Head of the Management Board of the park Luu Hoang Long said that up to now, the Hanoi People’s Committee has handed over 1,530ha out of the total 1,586ha to the park’s management board for being developed as planned. Up to now, 240 ha have been filled, representing an occupancy rate of the park is nearly 30%.

Since 2019, eight new projects have been granted investment licenses with registered capital of a combined VND14 trillion (US$603.4 million). In total, since its establishment, the park has attracted 94 investment projects with registered capital of VND89.3 trillion (US$3.8 billion). Total import and export turnover from 51 projects reached over US$4 billion in the recent five years.

Also, according to Long, there are currently some typical high-tech products being developed and manufactured in the park, including 5G smartphones and 5G network equipment manufactured by Vinsmart in cooperation with Qualcomm; cutting-edge aircraft engines components made by Hanwha Aerospace.

The Ministry of Science and Technology hoped to receive support from Hanoi’s authorities to solve some difficulties in order to continue accelerating the development of the park in accordance with the expectation.

To realize this, in the coming week, the city will work with the Ministry of Science and Technology to comprehensively assess the current state of science and technology of the city.

Secretary Hue also expressed his delight at the recent development of the park. However, with the goal of attracting high-tech enterprises and being a motivation for science and technology for the capital as well as the whole country, these results have left much to be desired.

According to Hue, the rate of occupancy, investment attraction, import-export turnover are modest and not commensurate with the potential of a high-tech park.

“We will continue investing and improving infrastructure here in order to lure more investors,” he emphasized.

In addition, the Management Board should promote investment attraction by exposing the potential of the park. More importantly, the park needs to improve the value per hectare by selecting high-tech projects which use less land but create great more value, the Hanoi’s Party secretary said. 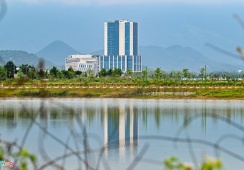