The Hanoitimes - The first phase of the project, estimated at VND99 trillion (US$4.25 billion), is set to be completed within 60 months and become operational by December 2025.

Airports Corporation of Vietnam (ACV), the largest operator of 22 commercial airports in the country, plans to start the construction of Long Thanh International Airport, the largest of its kind in Vietnam, in late December.

Under Prime Minister Nguyen Xuan Phuc’s approval of the construction of the first phase of Long Thanh Airport on November 11, the ACV is tasked with building a runaway, taxiways, a passenger terminal with capacity of 25 million passengers and a cargo terminal capable of handling 1.2 million tons of goods per year, along with other supporting facilities.

Total investment capital of the first phase of construction is estimated at VND99 trillion (US$4.25 billion) and funded by ACV itself.

ACV’s Chairman of Board Lai Xuan Thanh said the preparation for the construction was initiated right after the government submitted a feasibility study report of Long Thanh International Airport last September.

Mr. Thanh noted financial sources for the project come from its own cash account of VND36.1 trillion (US$1.55 billion) and the remaining would be mobilized under the forms of commercial loans or corporate bond sales to domestic and international investors.

At present, 22 organizations have signed non-disclosure agreements to discuss financing methods for the project. Among them, 12 signed memorandum of understandings (MoU) expressing their willingness to offer over VND143 trillion (US$6.14 billion) for the project, exceeding the amount needed.

According to Mr. Thanh, the project is set to be completed within 60 months and start operation by December 2025.

Under Vietnam’s socio-economic development plan in the 2021 – 2025 period, the country would need around US$150 – 200 billion to finance infrastructure development projects, including airports, seaports, railways and express ways, among others.

Under the plan, Long Thanh airport remains a key investment project for Vietnam, with a capacity of handle 100 million passengers and 5 million tons of goods a year, with total investment capital of US$16 billion. 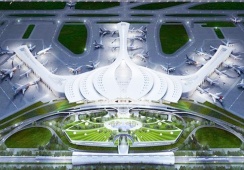