The Hanoitimes - Hanoi is seeking technical support for its socio-economic development, focusing on urban management, traffic congestion, and climate change.

The World Bank (WB) stands ready to support Hanoi in modernizing its urban railway system, including the line No.6 running from Noi Bai to Ngoc Hoi, and drafting a strategic vision for long-term urban transportation development.

Country Director for the WB in Vietnam Carolyn Turk made the statement at a meeting with Secretary of the Hanoi Party Committee Vuong Dinh Hue on January 12.

According to Mrs. Turk, while the WB has been assisting Hanoi in developing the network of Bus Rapid Transit (BRT) over the years, however, the bank’s financial support for the city remains at modest level.

During Hanoi’s rapid urbanization process, some social issues have emerged, including polluted rivers and air pollution, which should be promptly addressed to avoid severe consequences in the future, noted Mrs. Turk.

In this regard, the WB could share its experience with the city in dealing with water pollution and food safety issues, she continued.

Secretary of the Hanoi’s Party Committee Vuong Dinh Hue said the city is in need of huge investment capital for infrastructure development.

Over the past five years, Hanoi attracted US$25 billion in foreign direct investment (FDI), while the figure is estimated to reach over US$4 billion in 2020 despite severe Covid-19 impacts.

“To ensure an annual average economic growth of 7.5% in the next five years, total investment capital is expected to expand by 12% per year, with the amount set to nearly triple during the previous period,” stated Mr. Hue.

The Hanoi Party chief said to reach this target, Hanoi is mobilizing preferential loans from international organizations, including the WB, he said.

For the railway line No.6 section from Noi Bai to Ngoc Hoi, Mr. Hue wanted the WB to support drafting feasibility study report for the soon implementation of the project.

“The city is considering the option of using WB’s loans for other urban railway projects,” he said. 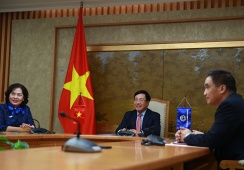