South Korean experts will help operate the Vietnam's largest trade center, which is expected to serve as a bridge to connect trade, cultural and tourism activities between the two countries.

The World Trade Center Binh Duong New City, the largest of its kind in Vietnam, is scheduled for opening in the southern province of Binh Duong this month.

The center will be operated by the Korea International Trade Association (KITA) and Coex Convention & Exhibition Center (COEX), according to an agreement signed with Vietnam’s real estate and infrastructure developer Becamex IDC on March 8.

Under the agreement, COEX will send its experts in exhibition organization and infrastructure management to Vietnam to operate the center.

A COEX representative expected the center to play a key role in facilitating cooperation between South Korean companies and their international peers under South Korean government’s “New Southern Policy”. 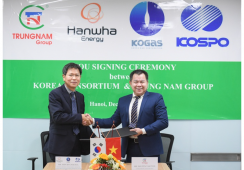