Vietnam has actively engaged in discussions and proactively proposed flexible solutions in many areas to achieve a high-quality agreement that balances all interests.

The 15 negotiating countries expect to sign the Regional Comprehensive Economic Partnership (RCEP) by year-end as it is a priority for ASEAN and its partners, according to Deputy Foreign Minister Nguyen Quoc Dung.

At a press conference on the 36th ASEAN Summit on June 23, Deputy Minister Dung said that negotiations for the deal have basically been finalized, except India which temporarily withdrew from it. However, the talks are still open for India to return, and the parties would take into account India’s conditions.

On the same day [June 23], ministers from countries negotiating the RCEP gathered at the 10th virtual inter-sessional meeting under the chair of Vietnamese Minister of Industry and Trade Tran Tuan Anh.

Minister Anh said that Vietnam has been working closely with other member countries to maintain ASEAN leadership and close cooperation with the six partners and accelerate the finalization of the RCEP talks as well as the legal review of the deal’s wording so that it may be signed in Hanoi in November.

With the aim of achieving a high-quality agreement that balances all interests, Vietnam has actively engaged in discussions and proactively proposed flexible solutions in many areas so as to address differences among the parties while still ensuring their own national interests, Anh added.

Participating ministers pointed out the unprecedented challenges facing global trade, investment, and supply chains due to the coronavirus outbreaks. It is necessary to enhance cooperation to promote strong and flexible economic recovery, along with sustainable, balanced, and comprehensive growth in the post-pandemic period. 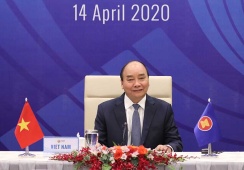 36th ASEAN Summit to be held online on June 26