To date, 291 industrial parks across the country have resumed operation with an average occupancy rate of 71%.

No doubt an industrial park with up to 20,000 workers is exposed to high risks of turning into a dangerous Covid-19 cluster, but manufacturing facilities should not be necessarily closed when some infection cases are found.

“If that a coronavirus carrier is in contact with several others, a specific unit or a team, then the whole facility is still allowed to operate.”

Deputy Prime Minister Le Van Thanh stressed the view in an online conference discussing the concern of businesses in industrial and hi-tech parks on September 20.

“Enterprises’ supply chains are located in multiple provinces/cities, therefore, the cooperation between local authorities are significant to soon bring economic activities back to normal on the condition of safety,” Thanh added.

Vice Minister of Planning and Investment Nguyen Thi Bich Ngoc noted to date, 291 industrial parks across the country have resumed operation with an average occupancy rate of 71%.

During the first eight months of 2021, Vietnam’s industrial parks and economic zones drew investment capital of US$8.1 billion into 428 fresh projects and 517 existing ones.

Total revenue of enterprises operating in industrial parks was estimated at $140 billion and generated export turnover of $100.7 billion, or 47.5% of the total, in turn contributing around VND96.5 trillion ($4.24 billion) in tax payment and creating jobs for nearly four million people, up 90,000 against late 2020.

According to Ngoc, a recent survey on 500 foreign-invested companies in Vietnam showed some of their most pressing concerns, including high input and transportation cost, shortage of input materials, growing expenses from enforcing Covid-19 restriction measures, and on-site production.

Representatives of foreign companies, including Unilever Vietnam, Nike Vietnam, or Nidec Vietnam have expressed their commitment to ensuring full safety during operation while calling for more support from localities for workers to move between provinces/cities, as well as giving vaccine priority for workers.

In response to a proposal from companies to support foreign experts entering Vietnam, Vice Minister of Foreign Affairs Nguyen Minh Vu said the current process has been simplified with the quarantine period being cut short from 14 to 7 days.

“Vietnam has reached an agreement with over 60 countries and territories for mutual recognizing of vaccine certificates,” Vu added, noting the authorities are planning to expand the list of eligible foreigners entering Vietnam.

Vice Minister of Finance Vu Thi Mai said the Standing Committee of the National Assembly on September 16 approved the Government’s proposal on waiving and freezing tax payment, which is expected to become effective in the coming time.

“The Government would hold monthly meetings with localities to better learn about difficulties that the business community is facing for timely support,” Thanh noted. 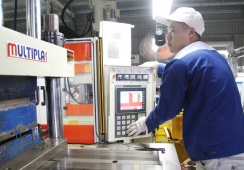