The Business Climate Index is the leading indicator of the European business and investment community in Vietnam.

European businesses in Vietnam expressed their positiveness about Vietnam’s prospects for green growth, according to the latest Business Climate Index (BCI) released by the European Chamber of Commerce in Vietnam (EuroCham) and YouGov Vietnam.

According to the BCI, nearly 80% of participants said their assessment of Vietnam’s green development potential improved from the first quarter of this year. About 44% of the respondents have good and excellent outlook regarding the potential for Vietnam’s green and sustainable development.

Regarding the link between green growth and foreign-direct investment (FDI), nearly 90% of the respondents believed Vietnam should accelerate green sector development to attract more foreign investment.

EuroCham Chairman Alain Cany said green growth is the way of the future, not just because it will help build a prosperous foundation for Vietnam’s economy and people, but also because it will support the country’s transformation into one of the world’s strongest markets.

Prime Minister Pham Minh Chinh’s COP26 commitments and the government’s National Green Growth Strategy show that the government is serious about making the changes necessary for a green transition.

“Therefore, despite the global economic uncertainty, it is an incredibly exciting and promising time to do business in this country,” Alain Cany underlined.

According to the BCI, European business stakeholders’ confidence in Vietnam’s investment environment declined slightly during the second quarter of 2022.

Following a first-quarter rise, the BCI dropped 4.4 points in the second quarter to 68.8 points. In contrast with earlier in the year, compounding factors such as the continuing hostilities in Ukraine, commodity price spikes, and the ripple effect of China’s zero-Covid policy have dampened expectations among Vietnam’s European business community. Although the BCI has fallen, it remains 7.6 points higher than in the fourth quarter of 2021, when it measured 61 points.

Vietnam’s potential growth is also being viewed with less favour by European business leaders. About 60% of respondents predicted that the Vietnamese economy would stabilise or improve in the third quarter of this year, compared with 69% who held this belief entering the second quarter.

According to the findings, 45% of respondents were significantly or moderately satisfied with Vietnam's efforts to attract and retain FDI, while 76% expected their company to increase FDI to Vietnam before the end of the third quarter. This may be due to the fact that 55% of respondents said Vietnam improved its FDI attraction and retention capabilities since the first quarter.

“Although the outlook for European business leaders has decreased since the last quarter, the factors affecting it are mostly beyond the Vietnamese government’s control. A perfect storm of external factors is contributing to global economic instability. This problem is not unique to Vietnam,” according to Alain Cany.

CEO of YouGov Thue Quist Thomasen added this BCI measurement clearly shows a small setback in Vietnam’s reopening and return to normal. However, Vietnam’s handling of the current situation is clearly a mitigating effect in the global economic context. The near target inflation rate and improvement in the country’s credit ratings are a strong testament.

The survey identified barriers to European investment in Vietnam and trade between the two sides. About 35% of respondents cited reducing administrative barriers as the most effective way to increase FDI, while 24% pointed to infrastructure development. 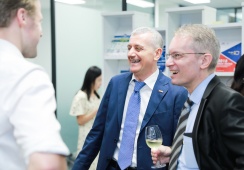