The Permanent Court of Arbitration (PCA) and the Government of Vietnam, on October 27, 2021, announced the establishment of a representative office in Hanoi.

The establishment of the office of the Permanent Court of Arbitration (PCA) in Hanoi proves a new stage of the Vietnamese legislative system, Permanent Vice Chairman of the Hanoi People’s Committee Le Hong Son said on November 22.

Foreign investors will have better trust in Vietnamese authorities when they consider launching investment projects in the country, Son told Marcin Czepelak, Secretary General of the Permanent Court of Arbitration, at a meeting.

“Hopefully, Vietnamese companies will receive support from the Permanent Court of Arbitration to improve their legislative qualities on international markets, especially in brand ownership,” the Hanoi vice chairman said.

Son added that the municipal authorities would provide the local PCA office with the best conditions to operate and resolve arising problems, especially during its early stage.

PCA’s secretary general Marcin said that the Hanoi office and local authorities would have two-way effects on each other, especially the improvement of trade activities, thus benefiting the growth of Hanoi.

He hoped that the PCA’s local office and Hanoi authorities would strengthen their cooperation and that the city would fully assist the office in proper operation.

As the international arbitrator, he said that PCA would have a whole obligation to accept and handle cases in Vietnam.

That means more foreigners will come to Vietnam and Hanoi, and it will become the chance for the city to promote its values to international communities, Marcin added.

The PCA secretary general also appreciated the growth of Vietnam’s capital city in recent years, saying the visit is a valuable chance for him to study the culture and daily life of Hanoi people.

The Permanent Court of Arbitration (PCA) and the Government of Vietnam, on October 27, 2021, announced the establishment of a representative office in Hanoi, the fourth outside its Hague headquarters.

Established in 1899 and headquartered in the Hague, the Netherlands, with 122 contracting parties, the PCA facilitates arbitration and other forms of dispute resolution between states.

Vietnam became a contracting party to the 1907 Convention for the Pacific Settlement of International disputes on February 27, 2012. As a contracting party to this founding Convention of the PCA, Vietnam is represented on the PCA’s panel of independent arbitrators, known as Members of the Court. These members may be called upon to serve as arbitrators in PCA-administered disputes.

Vietnam signs agreement with the Permanent Court of Arbitration (PCA) 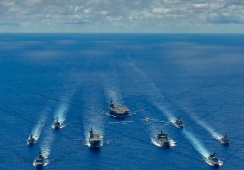