Chairman of the Hanoi People's Committee Tran Sy Thanh, on September 27, hails the relations between Hanoi and its French partners and hopes for more cooperative activities in the future.

Hanoi expects to foster its relationship with the French Embassy in a wide range of fields, including culture, urban development, and heritage conservation, Chairman of the city People’s Committee Tran Sy Thanh said on September 27.

Hanoi has established good relationships with French localities, and the two sides have made remarkable achievements, Thanh said at a meeting with the French Ambassador to Vietnam Nicolas Warnery.

Chairman Thanh said that the activities are comparatively modest considering the potential of bilateral relations, and there is still room for improvement.

Chairman Thanh also spoke highly of a stronger diplomatic tie between the two nations. On the occasion of the 50th anniversary of the diplomatic relation, the capital city would support related parties to conduct activities for the celebration.

Sharing the Vietnamese official's view, Ambassador Nicolas Warnery praised the relationship between Vietnam and France, to which Hanoi and its French partners have significantly contributed.

The ambassador hoped the two sides would continue their cooperation in ongoing and upcoming urban development projects, especially the activities to celebrate the bilateral diplomatic tie in Hanoi.

In addition to implemented projects, French agencies would assist the Hanoi authorities in hosting cultural activities, developing major markets, and executing actions in the fields that France has experienced, the ambassador said. 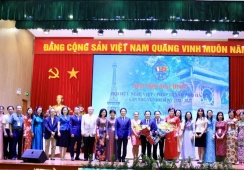