Planning is the first step to setting up the fastest and most efficient route to achieve Vietnam’s development goals set for the 2021-2030 period.

Hanoi and Ho Chi Minh City would serve as the growth pillars as the Government look to drive up the development of the key Northern and Southern economic zones.

The view was shared by the conference held on September 14 by the Appraisal Council for the national master plan for the 2021-2030 period, with a vision for 2050.

According to the council, the national master plan would be drafted with a result-based orientation focusing on development in regions of high potential until 2030.

From 2030 to 2050, the objective is to ensure harmonized and sustainable development among regions and localities.

In this context, Vietnam is expected to mobilize its resources to support the development of economic hubs, namely the triangle of Hanoi – Haiphong – Quang Ninh in the key northern economic zone, with Hanoi as the core; and the quadrangle of Ho Chi Minh City – Binh Duong – Dong Nai – Ba Ria – Vung Tau in the key southern economic zone, with Ho Chi Minh City as the growth engine.

Members of the council also agreed on the order of priority for economic zones and main industrial, and urban corridors, which will be built under the North-South axis and East-West direction, utilizing the existing network of highways, railways in connection with seaports, international airports, gateways, economic zones, key urban and growth pillars.

In this context, the priority would be to develop industrial corridors and urban areas surrounding Hanoi and Ho Chi Minh City and linked to international gateways.

The council also sets the goal of creating breakthroughs in urban infrastructure, focusing on expanding the network of transport infrastructure in Hanoi and Ho Chi Minh City, extending energy, and telecommunications with linkage to economic corridors.

Minister of Planning and Investment Nguyen Chi Dung expected the planning to provide an opportunity for Vietnam to reassess its development space in mapping out the vision for the future.

“International experience shows any country that looks for rapid and sustainable growth has to choose the right direction, method, resources, growth engines, and timeframe to reach the goal,” Dung said.

“Planning, therefore, is the first step and would set up the fastest and most efficient route to achieve Vietnam’s development goals set for the 2021-2030 period,” he continued.

According to Dung, Vietnam is willing to listen to recommendations, learn international practice and mobilize all resources and collective ideas to develop the best planning possible.

Strategic vision is required in the planning process

“With a new mindset and strategic vision, the planning should be able to identify potentials, opportunities, and competitive edge to maximize the country’s strength in the long term, and address current shortcomings, especially in infrastructure, legal framework, international connection, and development gaps between localities,” Chinh said.

“Planning should ensure the goal of rapid and sustainable development, balancing harmonized development in terms of economy, politics, culture, society, and environment. Cultural development is equally important to other priorities,” he continued, adding Vietnam would not sacrifice social advancement and equality to pursue purely economic growth. 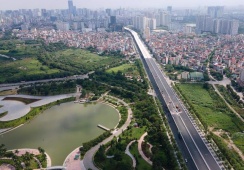