Hanoi set to make breakthroughs in transport infrastructure development in 2023

Hanoi saw strong progress in transport infrastructure development in 2022, and the expectation remains high for the capital city to continue the drastic measures and truly become a worth-living city.

Ring roads No.2; 2.5; 3; 3.5; 3.5; 4, and 5 - are considered the most important components, as they improve internal traffic and travel to areas outside Hanoi. Urban rail is also considered part of the basic infrastructure since the volume of passenger transport is significantly higher than that of buses while impacting the operation frequency of other public transport modes.

For years, many basic transport infrastructure projects in Hanoi have remained on paper, despite the enormous traffic pressure exceeding the existing system's capacity.

Meanwhile, some projects under construction are falling behind schedules, such as Ring road No.2.5 section Dam Hong - National Highway No.1; urban railway line No.3 section Nhon - Hanoi Station; Kim Dong underpass; or Highway No.6.

New development spaces would emerge alongside Ring road No.4 and create driving forces for socio-economic development while contributing to the city’s security, defense, and cultural purposes.

There are high expectations that Hanoi will maintain the strong progress of major transport infrastructure framework projects in 2023, eventually expanding the capacity of the city's transport system.

In particular, the unlocked projects should be pursued with utmost urgency for early completion.

"Investors and contractors in each project need to have a strong will and dedication", Chairman of the Hanoi People's Committee Tran Sy Thanh said at the groundbreaking ceremony to construct the National Highway 6 renovation and upgrade project.

The city’s mayor was not satisfied with the goal of completing the project as scheduled in 2027 and asked all parties involved to shorten the project execution time by one year.

That must be the main spirit of Hanoi regarding major projects in 2023 and subsequent years.

In parallel with the investment in the framework transport infrastructure system, Hanoi has spent a lot of effort and resources on urban projects, including inter-provincial roads, inter-ring roads, and national highways.

Projects with particularly important roles, such as Vinh Tuy Bridge phase 2; Ring road No.2 section Vinh Tuy - Nga Tu So, are scheduled to be completed in 2023 and would no doubt help improve the traffic situation in the city.

A number of projects stalled for many years, such as the road linking Nguyen Xien to Xa La and the road linking Le Trong Tan to Nguyen Trai, have had their problems solved thanks to the active involvement of municipal leaders and other units and departments.

The authorities have decided to allocate public funds for projects implemented in the form of public-private partnerships that are struggling to secure funding.

With site clearance seen as a long-standing issue in most transport projects, the city has assigned clear responsibility for each locality to speed up the progress.

Many urban road projects on paper have gradually materialized, such as the renovation and upgrading of the Ho Tung Mau - Xuan Thuy road, the one on enhancing the connectivity of the Nhon - Hanoi Railway Station, and the project on extending Thang Long Boulevard to Hoa Lac - Hoa Binh highway.

In particular, several projects with close connections to the Ring road No.4 – Hanoi Capital Zone have been approved and prepared for investment procedures, including bridges crossing the Red River  (Hong Ha, Me So).

Such improvements show that Hanoi has changed a lot in its mindset in the development of framework transport infrastructure, not only focusing resources on large projects as before but simultaneously investing in connecting roads to the surrounding areas.

When a project is completed, it will be connected with the existing infrastructure and maximize traffic efficiency.

However, the simultaneous implementation of many investment projects also puts great pressure on the municipal government, related units, and localities.

Especially in urban road projects that pass through densely populated areas with high traffic volumes, the construction process must ensure quality and progress and limit the inconvenience to traffic. These issues can only be solved when the city leaders maintain their focus on each project and promote the sense of responsibility and creativity of each organization and individual. 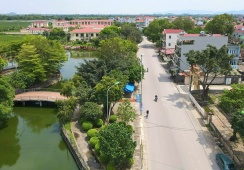