Many streets in Hanoi are lightened up at night and become crowded as of 19pm when people and visitors flock to the downtown, enjoying a bustling atmosphere with plenty of shops and amenities including restaurants, bars, and supermarkets.

Trang Tien Street, located by iconic Hoan Kiem Lake, is well-known for the namesake popsicle, book stores, and paint shops, while Hang Ngang, Hang Dao, Hang Gai, Hang Bong, and Hang Ma streets are seen as ideal destinations for shopaholics and Ta Hien is dubbed the beer street for its street food and drought beer. These streets are making up an animated Hanoi Old Quarter when the night falls.

Sitting on the sidewalks in tiny plastic stools by a street eatery, the barriers of language, culture, and eating habits seem blurry.

Nightfall is amusing for tourists and lucrative for traders. It has generated great job opportunities for workers, increased income for small businesses, and attracted more tourists.

The development of the night economy is seen as a lever for tourism when the Covid-19 pandemic is basically controlled.

With that in mind, the city’s districts have taken actions to spur the night economy. Many localities have identified walking streets with shopping stores and street food courts as a core of the local night-time economy.

According to the Hoan Kiem People’s Committee,  the district in the historical center of the capital city has made great gains in night-time economic development, making a significant contribution to the revenue of the district and the locals.

The capital city at night in the eyes of visitors should not only be shops, restaurants, bars, cafes, and trendy shops, but also street shows and city tours.

Being aware of this, Tay Ho District has been active in building an art performance space and making Trinh Cong Son Street a food street. Meanwhile, Ba Dinh District has planned to open a night-time food street in the Dao Ngoc-Ngu Xa area. In Hai Ba Trung District, a walking street along Thong Nhat Park and the nearby Thien Quang Lake will be open soon.

Long Bien District, though not a metropolitan and touristic locality, Ngoc Lam food street has become a new choice for Hanoians.

In Son Tay Township, about 50km from the capital city, the local authorities have opened a weekend walking street around the Son Tay fortress.

According to economic expert Dinh Trong Thinh, in many countries, night activities are an important source of income. In the UK, the GDP share of entertainment, shopping, food, and night activities is 6%, while in Australia, the size of the night economy is $102 billion, and in Japan, it fetched an estimated 400 billion yen. Meanwhile, New York is known as the “city that never sleeps”, and China is determined to turn the night economy into a real “gold mine”.

Meanwhile, West Lake has long been a quarter of foreigners with a high concentration of diplomatic and expat residents. Catering to their needs, the area is home to many high-end restaurants and bars. Near West Lake is the Quang Ba flower market, which is busy after midnight. This market supplies flowers to all flower shops and vendors in the capital city. There are many kinds of flowers with various colors and fragrances - it’s a little bit like walking into a giant outdoor garden, but at night.

"Deciphering Thang Long Imperial Citadel" night tour, Hanoi's hot new product has always been packed on weekends since its launch in April. After a month of the restart, the tourism program attracted thousands of visitors.

Some tourists revisited the destination several times and they still enjoyed the atmosphere of Thang Long royal palace at night and the feeling of living in the ancient time.

It is one of a series of new and unique products successfully operated by travel companies, tourist destinations, and the municipal tourism agency in an effort to boost the city's night-time economy associated with tourism development. The diversification of night tourism products and services will give visitors more entertainment options at night, helping to lengthen their stay and increase their spending, according to local experts.

To make the visitors of the Thang Long Imperial Citadel more impressed, the destination organizer displayed artifacts that are the "phoenix-themed Bodhi blade" made of terracotta. According to the national treasure register composed by the Institute of Imperial Citadel Studies, it is one of the most beautiful artifacts found so far that remained almost intact.

To revive the city's tourism industry after a two-year pandemic hiatus, city authorities have requested tourism companies and management agencies to restructure products to meet demand from domestic travelers. The development of the night economy is also expected to contribute to the goal of bringing the flow of visitors back to the level of the pre-pandemic period.

Dang Huong Giang, Director of the Hanoi Department of Tourism said the capital city has planned to build spaces for night activities such as a night market area, and a display area for products from Hanoi’s traditional craft villages as well as organize a souvenir gift market in the city.

“Nighttime activities have negative aspects, such as noise pollution and disturbing the lives of locals. The city will issue specific regulations on operating hours, location supervision, permitted business services, and management mechanisms,” she stressed. 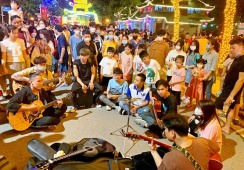 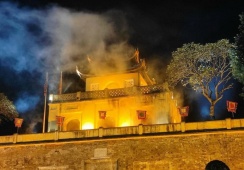