This year's winter would be earlier and colder than last year.

Vietnam’s Northern provinces, including Hanoi, will experience cold and rainy weather this weekend, according to the National Center for Hydro-Meteorological Forecasting (NCHMF).

Due to the impacts of a cold snap, it turns cold with rain at night and early mornings in Hanoi and Northern provinces from September 7, the NCHMF said.

The cold front will further strengthen on September 9, the center noted, adding that showers accompanied by thunderstorms and occasional downpours will dampen northern Vietnam from September 7 to 11.

The temperature in Hanoi is expected to remain between 26 and 28 degrees Celsius during the day and between 21 and 23 degrees at night, while in mountainous provinces the average daytime temperature will hover around 18 degrees, the center said.

Nguyen Van Huong, head of the Climate Forecasting Department under the NCHMF, said this is the first large-scale cold spell in the northern delta region in the winter of 2022-2023.

“The cold air waves accompanied by high wind convergence will cause heavy rain across northern Vietnam. From November on there will be many cold waves arriving in the north but they mostly affected the mountainous region,” Huong said.

“This year's winter would be earlier and colder than last year. Most of the severe cold waves would arrive between December and next February,” Huong added.

The NCHMF forecast about 23-26 waves of cold air will likely land in Vietnam in the winter of 2022-2023, starting from October. Particularly in November and December, temperatures are predicted to be 0.5-1 degrees Celsius lower than those in the same period of last year. The damaging cold spells (some 13 and 15 degrees Celsius) will appear in January 2023. 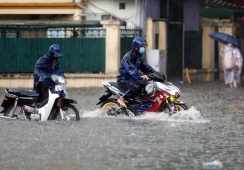