In spite of huge demand, the inefficient legal framework is making the process of land grouping difficult for all parties involved.

Institutional barriers are restricting the development of Vietnam’s farmland market, failing to turn land into a major source of growth for the agriculture sector, according to Bui Thi Minh Dung, expert from the Institute for Policy and Strategy for Agriculture and Rural Development (IPSARD).

Additionally, over 70% of Vietnam’s farmland is fragmented with an area of less than 0.5 hectare each.

“The small and fragmented farm plots cause difficulties for large-scale farming, which is a significant issue as Vietnam is integrating into global economy and local agricultural products are facing fierce competition,” said Dung at a conference under the program “Australia supports Vietnam’s economic reform” (Aus4Reform) on November 27, discussing the outlook of Vietnam’s farmland market.

The Vietnamese government has been promoting the accumulation of capital in agriculture through the policy of land grouping, but the progress so far is slow, as only 8% of total Vietnam’s enterprises are investing in the agricultural sector, said Dung.

Statistics showed the number of agricultural companies only accounts for 1.6% of total national enterprises, in which 90% are small and micro-sized ones that use 10–50 employees with registered capital of VND1-5 billion (US$43,000 – 215,000) each.

Such low economic efficiency is pushing farmers to look for jobs other than agricultural production. As a result, the rate of abandoned farmland increased from 1.7% in 2014 to 3.8% in 2016, while the average farming area per household decreased by 0.9% in the 2014 – 2016 period.

Meanwhile, there has been huge demand for farmland from agricultural companies for large scale production, or land owners looking for more land, but the inefficient legal framework is making the process difficult for all parties involved, said Vu Thi Huong from the Legal Department under the Ministry of Agriculture and Rural Development (MARD).

As of present, local companies are not allowed to purchase but only rent agricultural land for farming, so not many would be willing to commit long-term investment, stated Huong.

Huong also pointed to a lack of regulations for ownership rights for agricultural land compared to other types of land, while the current fee in transferring agricultural land is similar to other kinds of land, i.e. 2% of personal income tax, which is not favorable for the execution of land grouping policy.

“Land grouping is one of the main bottlenecks to the development of a modern and sustainable organic agricultural sector on the basis of cooperation and linkage among enterprises, cooperatives and farmers,” stated Huong, adding that a major revision in the existing Land Law is becoming an urgent matter. 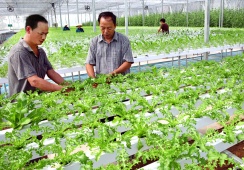