Vietnam is expected to relaunch international flights in early December, including those to Japan.

Major Japanese business association and corporations have expressed their commitments to supporting Vietnam’s sustainable development and contributing to bilateral relations.

In a meeting with JETRO Chairman Nobuhiko Sasaki, Chinh highlighted JETRO’s support for Vietnam in promoting trade and business cooperation between the two countries.

“Vietnam is committed to creating favorable conditions for business activities in the country,” he said.

Chinh called for JETRO to continue serving as a bridge for Japanese companies to invest in Vietnam to diversify supply chains, develop supporting industries, and transfer green technologies.

“Japanese companies can play an active role in helping Vietnam realize its national digitalization program and turn into a digital economy and society,” he continued.

Chinh shared the difficulties that Japanese companies in Vietnam were facing during the latest Covid-19 outbreak but noted the country’s anti-pandemic approach has now been shifted to safe adaptation to the Covid-19  and bring socio-economic activities back to normal.

He referred to his discussion with Japanese Prime Minister Kishida Fumio about the reopening of direct flight routes between the two countries.

“Vietnam is expected to relaunch international flights since early December, including those to Japan,” Chinh noted.

In a discussion with the Chairman of the Nippon Foundation Yohei Sasakawa, Chinh said Vietnam considers cooperation between organizations and localities the key pillar to benefit the people and contribute to peace, stability, and prosperity in the region.

In this regard, Chinh thanked the foundation for supporting exchange activities between the two defense ministries as well as programs for war veterans and victims or people with disabilities.

At talks with Chairman of Mitsubishi UFG (MUFG) Kanetsugu Mike, Chinh welcomed the active contribution of the financial corporation to the development of Vietnam’s finance-banking sector.

He expected MUFG to continue expanding its presence in Vietnam and support the country in enhancing state and corporate governance.

In response, Chinh noted transportation is among priority fields for development in Vietnam and called for the Japanese company to work with Vietnamese Government agencies to realize these projects.

Tadashi MAEDA, Governor of the Japan Bank for International Cooperation (JBIC), introduced his plan to support Vietnam’s transition to clean energies, reduce the carbon emission level and provide financial sources for investment projects in the country.

Chinh said as a developing country, Vietnam is in need of huge investment capital for development, expecting JBIC to provide loans with high concessional terms for Vietnam.

Talking to President of Mizuho Bank Tatsufumi Sakai, Chinh said the Vietnamese Government welcomed the partnership between foreign and local partners in restructuring weak banks in the country, while regarding the 10-year Mizuho-Vietcombank partnership as an example for others to follow.

Referring to the Vietnamese banks as the Mizuho’s long-term strategic partnership, Sakai said his bank made its first presence in Hanoi 25 years ago, and 10 years later in Ho Chi Minh City.

Sakai added around 2,000 Japanese companies operating in Vietnam are Mizuho’s clients, stressing its businesses not only support their customers but also contribute to Vietnam’s economy.

Following the wrap-up of the meetings, Chinh and his entourage left Tokyo for Vietnam, concluding the successful visit to Japan from November 22 to 25 at the invitation of Japanese Prime Minister Kishida Fumio. 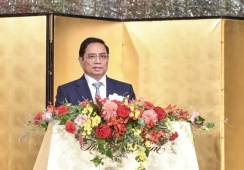 Vietnam, Japan sign cooperation agreements worth billions of US dollars