The electricity capacity used in Vietnam hit 42,482 MW at Monday noon [June 21], a new peak set so far due to scorching weather.

The prolonged searing heat on the large scale in the north had resulted in high power consumption since June 16, according to the National Load Dispatch Center (NLDC) under the Vietnam Electricity (EVN).

On the day, the capacity used in the north reached a record high of 18,700 MW while power consumption reached 4,700 MW in Hanoi.

The heatwave has led to the risk of a power grid failure as many types of outdoor electrical equipment have been exposed to the scorching sun. It has also left some lines and substations overloaded sometimes.

To limit risk to the national power grid, EVN recommends its clients to use electricity safely and economically, including setting air conditioners at 26-27 degrees Celsius in combination with fans, mostly in peak hours from 11:30 am to 3:00 pm, and 8:00-11:00 pm.

According to Ngo Son Hai, deputy general director of EVN, the country’s power consumption has so far this year increased 9.3% from the previous year.

Regarding renewable energy, Son said the installed capacity of renewables, including small hydropower plants, climbs to 22,250 MW (accounting for 31.2% of the total capacity), doubling that in 2020.

He said in the coming time, the sole power distributor will continue ensuring electricity supply in the hot season with special attention paid to centralized quarantine facilities and medical stations treating Covid-19 patients. 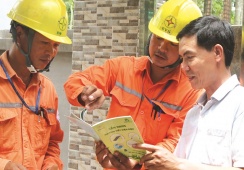