The latest move would bring the total capital commitment of the South Korean giant to $19.2 billion, reaffirming its status as the largest foreign investor in Vietnam.

The People’s Committee of the northern province of Thai Nguyen today [February 16] awarded the modified investment license for Samsung Electro-Mechanics Vietnam to inject an addition of $920 million into the upgrade of its factory in the province.

The move would take Samsung investment into the Samsung Electro-Mechanics plant in Thai Nguyen to over $2.27 billion.

The South Korean tech corporation started investing in Thai Nguyen Industrial Park in 2013 with an initial registered capital of $1.2 billion, which was later raised to $1.35 billion and has now been fully disbursed.

By late 2021, Samsung Vietnam’s total accumulated investment capital in Vietnam stood at $18 billion. The latest move would bring the total capital commitment of the South Korean giant to $19.2 billion, reaffirming its status as the largest foreign investor in Vietnam.

Samsung Vietnam General Director Choi Joo Ho previously stated the company’s commitment to Vietnam as the country has been poised to become not only Samsung’s global production hub but also a key R&D center soon.

The firm is in the process of building an R&D center in the West of Hanoi with an investment capital of $220 million. As the largest of its kind by a foreign-invested business in Vietnam and Southeast Asia, the center is scheduled to complete by late 2022 and will focus on researching new technologies such as AI, Big Data, or IoT. 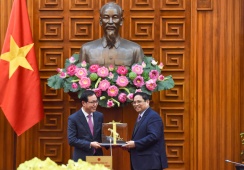 Gov’t committed to supporting Samsung in expanding investment in Vietnam 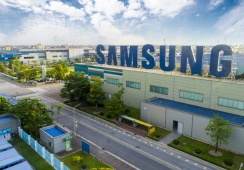