Energy, hi-tech farming, and pharmacy are potential fields for cooperation that enterprises from both countries could press on with.

Vietnam expected further investment and cooperation from Russian companies to meet the demand from the two sides and contribute to the bilateral comprehensive strategic partnership.

In a meeting with Director of the Russian Direct Investment Fund Kirill Dmitriev, Phuc noted

Vietnam would continue to create favorable conditions for foreign businesses, including those from Russia, to commit long-term business in the country, especially in fields of energy, hi-tech farming, and pharmacy.

Phuc highlighted the significant role of the Russian Direct Investment Fund in developing the world’s first Covid-19 vaccines including Sputnik V and Sputnik Light, as well as the ongoing cooperation between the Fund and Vietnamese partners, including Vabiotech and T&T in transferring technologies for Covid-19 vaccines and drugs manufacturing.

The State President expected the fund to continue giving Vietnam to accessing the supplies of vaccines and drugs from Russia, as well as provide financial resources for major projects in the country.

As one of the fastest-growing economies in the world, Vietnam has so far attracted nearly 35,000 FDI projects with a total registered capital of US$400 billion.

At talks with the Chairman of Systema Corporation V.Evtushenkov, Phuc welcomed the company and its subsidiaries, including Binnopharm, that have a strong partnership with Vietnamese partners in providing vaccines, drugs, and medical equipment to Vietnam, along with the construction of a factory for vaccine and drug production in Russia-Vietnam Industrial Park in Haiphong with T&T Group.

Phuc called for Systema to expand cooperation with Vietnam in the fields of agriculture and forestry that both have deep expertise and high potential.

Meeting with Vice President of Gazprom Elena Burmistrova, Phuc noted cooperation in energy and gas between the two countries are one of the main pillars in Vietnam-Russia comprehensive strategic partnership.

Phuc welcomed the partnership of PetroVietnam and Gazprom over the years, adding the Vietnamese Government would continue to support Gazprom expanding investment activities in Vietnam to fields of high potential and demand, such as power-gas.

In a meeting with Novatek Chairman Leonid Mikhelson, President Phuc noted the experience and high capability of Novatex and thanked the cooperation for vaccine support for Vietnam.

Referring to a recent cooperation agreement between Novatek and PVPower on December 1, Phuc said Vietnam continues to support foreign businesses, including Novatek, to join energy and oil projects in Vietnam.

At talks with Chairman of Miratorg Victor Linik, President Phuc stressed the significance of agricultural cooperation between the two countries, as well as the fact that Russia has become a major pork exporter to Vietnam.

Phuc welcomed Miratorg’s proposal in expanding cooperation in the field, especially as farm produce of the two countries are complementary instead of competing directly with each other.

“This would contribute to trade and economic cooperation between the two countries, including the implementation of the Free Trade Agreement between Vietnam and Eurasian Economic Union [AEAU],” he said.

Corporate executives in meetings expressed their impression of the development of Vietnam and the country’s effective measures against the pandemic.

They shared the sentiment that Vietnam will remain a potential market and there is huge potential for further cooperation and investment. Vietjet Air to operate direct flights to Russia in mid-2022 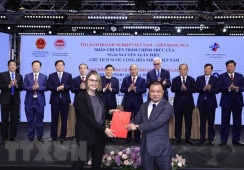