The re-elected State President stressed he would continue to promote the nation’s unity to aid Vietnam’s comprehensive and sustainable development.

State President Nguyen Xuan Phuc has been re-elected for the 2021-2026 term with the endorsement of 100% of 483 National Assembly deputies.

Phuc then proceeded with taking the oath of office by pledging full allegiance to the Motherland, People, and Constitution of Vietnam, and vowing to fulfill the duties entrusted by the Party, State, and People.

In his inaugural speech, Phuc said he would continue to promote the nation’s unity and historical, cultural, and traditional values to aid the country’s comprehensive and sustainable development.

Amid the fourth Covid-19 outbreak, Phuc expressed his belief that the people’s strong will and trust in the government would ensure the nation’s victory against the pandemic.

Before being elected as the State President for the first time four months ago at the 14th National Assembly, Phuc was Vietnam’s Prime Minister for two consecutive terms of 2011-2016 and 2016-2021. 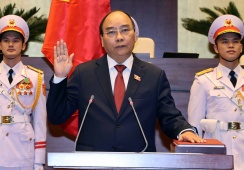